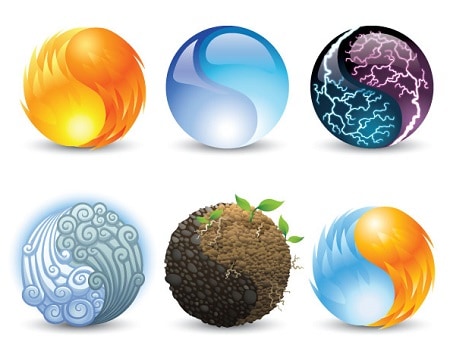 Every paradigm has its theories. From century to century, the development of philosophy, religion, medicine, and belief systems have been created within every culture. It is the elements, which are the foundation these paradigms are built upon. The elements have been associated with all aspects of farming, healing and religious ceremony. The natural elements that most people are aware of, are based on the classic Greek and Roman elements of fire, water, earth and air.

Prior to the development of these civilizations, the Mayan, Celtic, Indian, Tibetan, Chinese and Japanese devised a sense of additional elements to explain the natural processes and cyclical theories of nature. The elements of wood, metal and ether were also apart of this codex, that summed up a rhythm of the natural world that made sense to them. Within these paradigms, these elements are still considered the “master plan” of the natural world today. Here is a brief look at each one and their associations.

Wood: Wood is the element associated with the Spring season and with wind. The Wood element is associated with Feng Shui and Chinese medicine. The element of vitality and strength, Wood helps to move your life upward while anchoring you to your roots or our source of strength. Wood represents breaking through barriers as it moves aloft. Wood is associated with the emotion of anger and shouting. It’s organ association includes the liver and gallbladder. Wood symbolizes the natural process of rebirth, growth and rejuvenation.

Air:  Air is also an element associated with the Spring season and with wind. Air is one of the 4 classic elements of Greek and Roman times. In some cultures, air is associated with Fall. In both seasons it is a time of two extremes, upheaval and growth, or decay and dying. Air represents the breath of life!  Your breathing is the voice of your spirit. It’s depth, smoothness, sound, and rate reflect your mood. The cosmic breath, the Hindus speak of called “prana” is also the energetic life force the Chinese refer to as “Qi” energy. Keywords for air include: mind, brain, intellect, logical thought, curiosity, travel, youth, light, energy, computers, machines, impersonal, detached, mental powers, visions, psychic power, wisdom, learning, imagination, ideas, beliefs, and theory. Air is associated with the emotions of calm, upheaval, flexibility, tornadic or aloof behavior. It’s organ association include the lungs and peripherals.

Fire: Fire is associated with the Summer season and with heat. In the Chinese Medicine paradigm, the element is associated with the heart, pericardium, small intestines and related to the tongue. Fire is one of the 4 classic elements of Greek and Roman times. Keywords for fire include physical strength, force, courage, desire, initiative, fertility, passion, purification and rejuvenation. It represents both light and heat. This element is associated with the mind and it’s stability. The heart is the “seat” of the mind and therefore, its highest expression is love. Enthusiasm, warmth in human relationships and conscious awareness. Emotionally, when the fire element is balanced, sensitivity and expression, true fulfillment and the equilibrium between heart and mind are our greatest rewards.

Earth: Earth doesn’t necessarily always represent the physical earth, but that part of us, which is stable, solid and dependable. Earth is one of the 4 classic elements of Greek and Roman times.Earth is the realm of abundance, prosperity and wealth. Earth is a personality trait and Earth is an element, as well. The element is associated with the spleen (pancreas) and stomach and related to the mouth. Keywords associated with the earth element include traits of sensations, patience, stability, strength, health, grounding and centering of energies, promoting peace, fertility, money, business success, stability, warmth, comfort and physical labor. The element, Earth is associated with the Late Summer season in Chinese Medicine and with dampness.

Metal: The element, Metal is associated with the Fall season and with dryness. It is most used in the areas of Chinese Medicine and Feng Shui paradigms. The element is associated with the lungs and large intestines and related to the skin and the nose. Physically, metal out of balance can manifest as asthma, allergies, colds or flu, constipation, diarrhea or ibs. Keywords associated with metal include our mental activity such as intellect and the ability to reason, memory, thoughts, knowledge and comprehension. Metal is associated with the emotion of grief. Metal governs organization, order, communication, the mind, setting limits, and protecting boundaries. It also rules new beginnings, friendship, clarity, and positive expression. The Metal elements relates to taking in and releasing.

Ether : This is the most interesting of elements found in the Ayurvedic system of medicine. Within the Indian and Celtic paradigms, ether is also called Spirit. Ether is the emptiness between matter. Ether is the space in which everything happens. It is the field that is simultaneously the source of all matter and the space in which it exists. The chief characteristic of ether is sound. Here sound represents the entire spectrum of vibration. When we pay attention to sound, we are mindful. It is consciousness. This is the foundation all the other elements transition from. It is the receptivity and non-resistance to what is true.  Ether is considered our transitions in life.

Learn more about the power of these elements and their associations…