India’s Valley of the Flowers 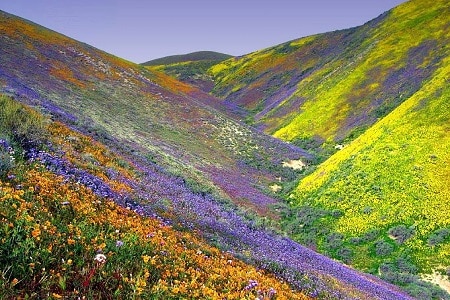 Valley of Flowers National Park is an Indian National Park, located in West Himalaya, in the state of Uttarakhand. It is famous for its meadows of endemic alpine flowers and flora. This richly diverse area is also home to high altitude birds and rare endangered animals. The Valley has long been acknowledged by renowned mountaineers, Indian yogis, botanists, and throughout literature for its endless landscape of flowers. It has been recognized internationally for over a century and even referenced in the Hindu religion.

Flowers populated there include orchids, poppies, primulas, marigold, daisies and anemones. Sub-alpine forests of birch and rhododendron cover additional areas of the park. The Valley of Flowers is endowed with 520 species of higher plants, 498 of them are flowering varieties. The Valley of Flowers was declared a national park in 1982 and is now a World Heritage Site.

Brahma Kamal: is a species of flowering plant in the Asteraceae. It is native to the Himalayas, Himachal Pradesh and Uttarakhand, India, northern Burma and southwest China. In the Himalayas, it is found at an altitude of around 4500 meters. This precious white flower

Frangipani (Plumeria rubra): One of the world’s most sweetest fragrances and most exotic flowers. Frangipani is found in India and is a Sacred flower. Valued for its intoxicating and irrepressible beauty, this waxy, five-petaled bloom may be star shaped or pinwheel shaped.

Flame-of-the-forest or bastard teak (Butea monosperma): This tree features leathery dark green trifoliate leaves each having three rhombus-shaped fiery red-orange leaflets sprouting from it. In Sanskrit, it is the flower which is extensively used as a symbol of the arrival of Spring and the color of love. It is said that this tree is a form of Agni, (God of Fire). In Telangana, these flowers are specially used in the worship of Lord Shiva on occasion of Shivratri.

Ganges Primrose (Asystasia gangetica): Is commonly known as the Chinese violet, coromandel or creeping foxglove. It is associated with being from the Ganges river of India and is a beautiful ground cover flower when in bloom.

Lotus (Nelumbo nucifera): also known as Indian lotus, sacred lotus, or bean of India, is one of two extant species of aquatic plant in the family Nelumbonaceae. It is often colloquially called a water lily. An individual lotus can live for over a thousand years and has the rare ability to revive into activity after stasis. Hence, its connection to the wisdom of the ages and the ancient sage.

Jasmine (Solanaceae Nocturnum): or Night Blooming Jasmine is one of the most sought after and sacred flowers on Earth! Nicknamed The Night Queen or “Raat ki Rani” (as known in India), the blossoms open at night and are produced in “cymose inflorescences”. This is when their powerful, sweet perfume is released. The flowers are harvested at the height of the full moon and pressed for their fragrant oil!

Marigold (Calendula): is derived from the Christian name for the flower being “Mary’s Gold”. As with many things in India, the plant was introduced by Portuguese colonists. Flower garlands are a staple in Indian traditions as they are considered so pure. It is also said that marigolds symbolize cruelty, grief and jealousy. It can mean to show strong passion, being associated with the legendary brave and courageous lion.

Magnolia (Magnolia grandiflora): is one of the most magnificent of the fragrant trees. In most parts of India, magnolias are commonly grown. The Manipuri name “ootahmbal” means “tree lotus”. The flowers are used as offering in puja and relate to the Solar Plexus Chakra.

Tiger Lily (Lilium Lancifolium): The tiger lily has the most unique looking petals. Their vibrantly colored orange leaves are spotted like a tiger’s coat, giving this flower a positive connotation of strength, courage and nobility.

Patchouli (Pogostemon cablin): Patchouli is believed to have received its name from the Hindi word “pacholi,” meaning “to scent.” It has a sweet, spicy, musty, earthy (and intoxicating) fragrance. In the 1800s, the scent of Patchouli oil became the benchmark that determined the authenticity of Eastern fabrics like silk, as it was used to protect the fabrics from insects.

Within the traditional Ayurvedic medicine paradigm, essential oils, seeds and flower oils make up a large part of the nourishing aspect of this therapy. These oils are used for their calming, soothing, moistening and lubricating properties.
In Sanskrit, the word for oil (Sneha) is also a word for love. How poetic, that this nourishing and cultivating product of nature’s own bounty, also refers to the deep, penetrating and ultimate emotion, which rules the heart.

To protect the body, skin and hair from highly volatile essential oils, we tend to blend them into a base oil. This fatty oil, buffers the intense qualities of the pure essential oils and balances them in this base oil. These base oils can be used on their own or used as a base or “carrier Oil”.

Sesame Oil is considered the “King of Oils”. It is pressed from sesame seeds and is a rich, robust, and the unrefined oil that is a fundamental part of the nurturing Ayurvedic tradition. It the perfect base oil for a majority of massage and herbal oils and elixirs. It is a great oil for the vatta constitution. It has been used to support numerous systems in the body for thousands of years.

Coconut Oil is a soothing, cooling oil that is easily absorbed. It is an excellent massage oil for pitta dosha and hydrates your skin, body and nourishes hair. This is a very cooling oil. It the perfect base oil for a majority of massage and herbal oils and elixirs.

Sunflower Oil is a rich oil that is often used as a base oil for blending other essential oils with. This golden oil is extracted from the seeds of the sunny sunflower. Generally, considered tridoshic, sunflower Oil is balancing for pitta because of its cooling nature. It is also good for vata dosha, and is one of the few oils suitable for naturally oily kapha dosha due to its light texture.

Ashwagandha: is one of the most highly praised adaptogen herbs in the Ayurvedic Materia Medica. Improving the body’s ability to resist stress, it enables our system to sustain vital (prana) energy throughout the day. It is considered one of the best herbs for calming vata imbalances, promoting sound, restful sleep, and revitalizing the male reproductive system.

Bhringaraj (Eclipta alba leaf): is an herb used for strengthening the hair, skin, bones, teeth, sight, hearing and memory. It supports live and lung function. This herbal powder is often blended in sesame oil and is used for balancing all three doshas. LIn particular, Bhringaraj’s cooling nature is particularly helpful for pitta dosha.

Brahmi (Centella asiatica): or “the energy of universal consciousness” is one of the most renowned mentally rejuvenation herbs used to promote mental performance and support proper nervous system function. This herb improves concentration, memory, and alertness. It is highly sattvic and has been incorporated by yogis to assist in meditation for centuries. Brahmi is a natural blood purifier and supports healthy skin and lustrous hair. This cooling herb is blended in either sesame or coconut oil and tonifies the pitta dosha.

Neem is one of the most famous in the herbal Materia Medica of Ayurveda. The cooling support of this herb can be blended in a base of sesame or coconut oil and used to pacify pitta related excess heat,irritation, inflammation and skin problems. This herb helps detoxify the liver and blood and removes excess pitta and kapha from the system. It is also used to support healthy skin and to maintain healthy blood glucose levels.

Mahanarayan is a blend of 37 Ayurvedic herbs in a base of sesame oil. Traditionally, this herbal combination has been used for centuries to target sore joints and muscles. The warming aspects of Mahanarayana oil are very beneficial for pacifying excess Vata through its restorative action on the mind and body. This oil and herbal blend is restorative and strengthening and beneficial for anyone feeling debilitated by overwork or wishing to prevent the effects of stress and overwork.

Learn more about the magic and gifts from India…