~ Dream archetypes popular in every culture. These dreamy, distinct symbols we create in our nightly adventures!

~ What dreams may come…

Dreaming of death is often an indication of great change in your life. In some traditions it means that someone in the family would soon be wed and the wedding would be beautiful. In some circles it means a birth, the opposite of death. To be unable to identify the dead person means a windfall of money for you, To talk to a dead relative is a sign of great good luck.

Throughout history, people from various religions speak of Azrael “Archangel of Death” who comforts them when they are dying and escorts their souls into the afterlife. Many people from all walks of life who have had near death experiences have reported that they encountered angels who have helped them. Even people who have seen their loved ones dying have also reported encountering angels who gave their dying loved ones peace. When people die, angels may accompany their souls into another dimension, where they’ll live on. It may be just be one angel who escorts a particular soul or it may be a large group of angels who make the journey alongside a person’s soul.

The Angel of Death has been personified as an evil creature wearing a black hood and carrying a scythe. This originated from the Jewish Talmud’s description of an evil Angel of Death who represents the demons associated with the fall of mankind However, the Midrash (a Hebrew term for ways of interpreting biblical stories) explains that God does not allow the Angel of Death to bring evil to righteous people. Jewish tradition says that there are many different angels such as Gabriel, Samael, Sariel, and Jeremiel who may help dying people make the transition from life on Earth to the afterlife.

The Muslim’s Quran mentions an Angel of Death who is charged with taking your souls, “and then you will be returned to your Lord.” (As-Sajdah 32:11). Muslim tradition says that the angel Azrael separates the soul from the body at the moment of death, and Azrael and other angels who help him accompany it to the afterlife.

The Christian Bible doesn’t name one specific angel as the Angel of Death. But it does say that angels are “ministering spirits sent out to serve for the sake of those who are to inherit salvation” (Hebrews 1:14) and makes it clear that death is a holy event for Christians (“Precious is the sight of the Lord in the death of his saints,” Psalm 116:15), so according to the Christians, it is reasonable to expect that one or more angels will be present with people when they die. The Catholic Church teaches that the Archangel Michael escorts souls who have died to the afterlife. Michael may communicate with dying people near the end of their lives on Earth, helping them find redemption before they pass on.

The Buddhist Tibetan Book of the Dead describes how people who are not yet ready to enter God’s presence when they die may find themselves in the presences of Bodhisattva (an angelic being) after death. Such bodhisattvas may help and guide the deceased souls in their new state of existence.

Dreams of being haunted by the dead or guided by the dead is more common than most being may think. Many women have dreams of being cursed or criticized or by someone who’s passed away often from their deceased spouse. Men, on the other hand have more dreams that their deceased mother is scolded them for giving away their belongings, not marrying the right person or they are not good enough. Sometimes you may receive a significant message from your deceased loved one or an angel, who has a meaningful impact on your life.

Everything related to a deer is favorable. A long lasting friendship, good business affairs and fortune in love along with gentleness and kindness.

The devil as a symbol represents evil in all its forms. In your dream you can see yourself confronting the devil or being the devil. As a fallen angel, the devil, is associated with ego, selfishness, conceit and deceit. Trickster and traitor, he is a representation of our struggle with good and our own dark side we all have to contend with. If you are the devil in your dreams, it is your constant fighting with the egotistical side of your psyche that you must pay attention to. If you are struggling with the devil, it is your feelings of goodness or purity that feel threatened. How do you fight back?

The Greek saw this strange line as a symbol of irrational existence. Dividing a square into two diagonal triangles with no simple relationship to its sides, this Oblique (neither parallel nor at a right angle to a specified or implied line) or obelisque later become an obelisk (a tall, four-sided, narrow tapering monument which ends in a pyramid-like shape at the top.) One of the natural sacred symbols that is the basis for all symbols.

Multiple cultures throughout history see dice as symbols of chance and therefore, a gambler’s chance or luck of the draw. When matters of chance are involved… shake the dice, blow a kiss, throw of the dice.

Every society and culture has their dog mythology. The dog is often the companion of God (and therefore, man). He is the guard dog. He acts as the go-between due to his keen sense of smell, his intuitive gift of second sight and psychic abilities. Hecate, the Goddess of the Underworld and Queen of the Witches, had her dogs, haunting the crossroads. Man’s best friend also has a star named after him, Sirius the dog star constellation. So honored among the Chinese, the Dog was made one of the 12 Celestial Creatures in the Chinese Zodiac. Dogs are most associated with loyalty, friendship, care and guardianship How do you see them in your dreams? What are they doing? What color are they? These are all individual symbols you should pay attention to. Your connection to dogs in your waking life, often bring forth your emotions in dreams. Fear of dogs can indicate a fear of friendship or commitment. Aggressive dogs are about the fear of attack. From who? There is a master/servant component to dogs. Are you the leader of the pack or a follower? Does there seem to be an understanding between the two? A biting, barking or fighting dog indicates your own self-defense. Are you doing the biting or barking or are you getting it from another? The fighting, biting dog is the lashing out of your emotions, while the barking dog is a warning. A dog that is chased or killed can be an indicator of bad luck or potential threat. A love for dogs offers trusted friendship and loyalty.

Dolphins represent grace. The magical communicators of the sea, dolphins have a protective, stabilizing, compassionate demeanor. The dolphin is a messenger of wellbeing to the pure of heart. They have been honored and associated with Greek and Roman dieties, sailors and seafarers, Celtic and Christian cultures. Dolphins are highly intelligent mammals, and as such represents the mental attributes and accomplishments involved in the dream itself. It also denotes that the dreamer has made some giant strides upward through the use of his mental faculties, and, if the rest of the dream bears it out, a dolphin is like a pat on the dreamers back with a well done thrown in for good measure.

Simplicity and sturdiness. Success in your undertakings, whether in travel or love. Surrounded by loyal friends. The donkey, in history has also come to represent stupidity. The donkey has long been considered the “poor man’s horse” and therefore, symbolizes poverty and humility.

The very beginning of any symbol. It is the first mark made at the start of a journey/symbol/discovery… not the end of a sentence. The dot, or bindhu (which means drop), is the absolute, or mark on the forehead. At the place of the Third Eye, it is the point believed to be the “seat of the soul”. One of the natural sacred symbols that is the basis for all symbols.

The symbol of peace and love heralds the end of disagreements. Dreaming of white doves foretell a happy domestic life filled with peace and tranquility. A flock of doves means that you will soon welcome home an old friend, and if you hear doves cooing, your love will be returned, but, if you hear turtle doves you will soon hear some disheartening news. Also seen as the Holy Spirit or angel of peace.

The dragon is probably one of the most permeating and legendary creatures in history, typically with serpentine or reptilian traits, that is featured in the myths of many cultures. There are two distinct cultural traditions of dragons. The European dragon, derived from European folk traditions and ultimately related to Greek and Middle Eastern mythologies and the Chinese dragon, with counterparts in Japan, Korea and other East Asian countries. The two traditions may have evolved separately, but have influenced each other to a certain extent, particularly with the cross-cultural contact of recent centuries. The English word “dragon” derives from the Greek “drakon”, meaning serpent of huge size or watersnake. They are archetypes of power, sovereignty, strength, wisdom and nobility. The dragon’s features and abilities have changed throughout the years due to cross-cultural stories. They have been known for their keen eyesight, making them guardians of treasures or keepers of secrets. The fire breathing dragon was seen as a force to be reckoned with. His green color would often associate him with greed, while the flaming red dragon would become the emblem of Wales. Saint George of England overpowered the dragon in a symbolic act of freedom and oppression, while the word “dragon” in China and Japan was synonymous with The Emperor. It is the dragon as Satan (serpent), who is defeated by Archangel Michael. He has also found his place in the celestial heavens as the fifth sign of the Chinese Zodiac, where he also equates to Leo the Lion in the Western Zodiac.

Japanese and Indian cultures see dragonflies as symbols of dreams, change and enlightenment. They represent courage, luck, strength, and happiness. Also because of their unpredictable movement, they can represent unreliability. They are considered the insect of summer, by the Chinese.

Native American (Ojibwa) is used as a charm to protect sleeping children and adults from nightmares. According to legend, the hole in the center of a dream catcher web allows good dreams to reach the sleeper, while the web itself traps the bad dreams until they disappear with the first light of morning. 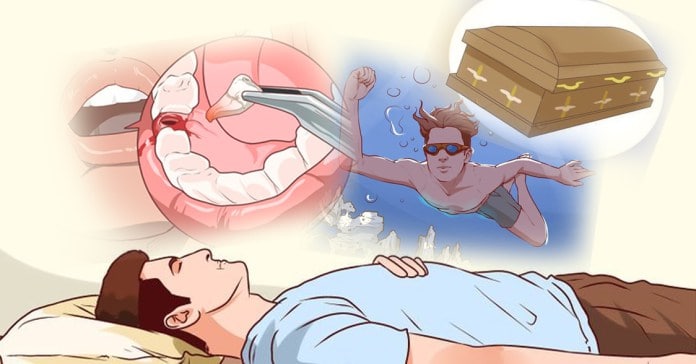 Dreams are often categorized into different themes or “energetic ideas” of the things we seek out most in life. Below are some of the most popular dream themes and ways of understanding and solving these situations in your waking life: