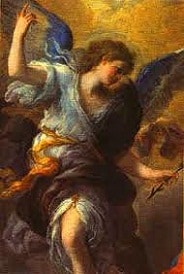 Ruler of the First Heaven, as well as both the spheres or levels of angelic influence, Cherubim and Virtues. Gabriel is named as one of the seven archangels in the Book of Enoch, who stand before God. Gabriel is the “messenger“. Gabriel (along with Michael) are the only two angels mentioned by name in the Old Testament. According to the New Testament, he is the angel who announced the birth of Jesus to Mary and watched over the tomb of Jesus, announcing the resurrection to the disciples. Under Islam, Gabriel woke Mohammed to dictate the Koran to him. Gabriel’s name means “God is my strength”. He is known to inspire through dreams, rituals and meditation therefore, considered the empowerer. Gabriel is the portal to inspiration, change, intuition and our emotions. Gabriel is considered the guide for both childbirth and the transition and journey through death.