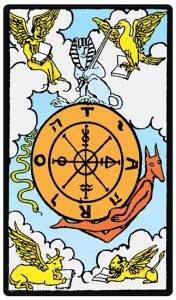 The Wheel of Fortune card represents those events in our lives that come out of nowhere. They come in the form of unexpected surprises, a promotion we don’t needing/wanting/requesting – an inheritance from a relative. This card reminds us that change is inevitable. Nothing stays the same forever. So another words, what is today, may not be tomorrow. The lesson from this card is learning how to handle this change.

The Wheel of Fortune reminds us that we don’t always have control over what comes our way, but we can control how we choose to respond to this change. This is where the art of detachment is so valuable a lesson.

This is an important concept to grasp when we contemplating this card meaning. When we approach our lives with a rigid mindset, we set ourselves up for disappointment and unhappiness. This is a reminder to stay calm, cool, collected and centered, so that you can make good decisions when the world starts spinning out of control.

Remember, we don’t always have control over our situations, but, we can decide how to respond to it.

Angel: The angel of the Tarot represent messages from the divine. Angelic messages may be received from another person or may come from our own dreams or subconscious mind. They can also come during meditation. Angels guide us and care for us. The message we receive from them, will be for our highest good.

Anubis is the Ancient Greek, Egyptian, Coptic god associated with cemeteries, embalming, mummification and the afterlife. In ancient Egyptian religion, he is usually depicted as a canine or a man with a canine head. Archaeologists identified the sacred animal of Anubis as an Egyptian canid, that at the time was called the golden jackal, but recent genetic testing has caused the Egyptian animal to be reclassified as the African golden wolf.

Bull: The bull represents the element of Earth and the zodiac sign of Taurus. Bulls represent strength, vitality and power. The bull is also a symbol of luxury and wealth. It represents upward growth.

Lion: The lion is king of the beasts and represents the king and emperors. It is a symbol of strength and courage, pride and desire. The zodiac sign of Leo is represented by the lion and associated with the sun and the element of Fire.

Eagle: The eagle represents the element of Air, the mind and the intellect. A sharp sighted and strong hunter, the eagle is seen as a symbol of power, truth and authority. In the “tetramorph” (the gathering of the man, bull, lion and eagle) as seen on The World card, the eagle is believed to represent the evangelist, St. John, and therefore, divine inspiration. Additionally, as an enemy of the serpent, the eagle is often used to represent God. Finally, eagles represent father and male leaders, therefore, protector of the family or a nation.

Clouds: Clouds are typically a symbol of “that which is higher” – higher thought, higher energy, etc. In this case, the clouds are a symbol of a higher power at work in the events of our lives. As mentioned earlier – sometimes things just happen – and the symbol of the clouds represents events “coming out of the ether” and moving our lives in an unexpected direction.

Falling Off: It’s inevitable, as the wheel turns, a few things are going to fly off to make room for new things. It’s the nature of evolution and revolution. As already mentioned, it’s important to consider our approach to loss. If we view loss as a bad thing – this is exactly what it will be. If, however, we observe a removal as being an opportunity, we broaden our perspective and allow for positive change. The illustration of “falling off” is also representative of beliefs and ideas. As we have new ways of thinking about things, our old ways of thinking must drop off. It’s simply the way life works.

Sword: The sword symbolized the element of Air and the activities of the mind. It represents honor, virtue, communication, rationality and elimination.

Wheel:  or circle, is the central star player on this card, it’s important to take a close look at the symbolism of the Wheel. Since ancient man, the Wheel has been a symbol for mobility, revolution, and cycles. Used in work, the wheel has enabled man to perform more efficiently. Used in ritual, the Wheel is symbolic of the natural flow of energy. When we consider the ease of the Wheel turning and flowing in motion, we are reminded of how our own lives move in much the same manner. Although we have old and new events – the hub of the wheel (symbolic of ourselves – our core nature) remains the same.

Key Questions
When the Wheel of Fortune comes up:

Do you feel lucky? Why?
How do you handle change?
How do you feel about chance or luck?
If you consider change “bad” consider why you think this way?
Do you take the time to consider the consequences of your thoughts and actions?

Characteristics: Appreciates abundance, ethical, enthusiastic, social, foolish, tends to take on too much. Luck, fortune, destiny, end of a problem, progress, unexpected news. Wheel of Fortune is a complete circle or <B>card of the World</B>. The card has two creatures moving in opposing directions and overseen by a creature on the top bearing the sword of authority. This onlooking figure has been interpreted as the God-head over looking its subjects. This card encompasses all opposing forces of the Universe- yin/yang, male/female. dark/light, good luck/bad luck, positive/negative.