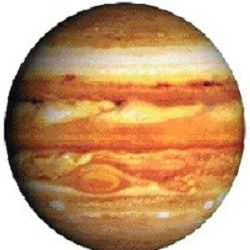 Jupiter is associated with the principles of growth, expansion, prosperity, and good fortune. Jupiter governs long distance and foreign travel, higher education, religion, and the law. It is also associated with the urge for freedom and exploration, humanitarian and protecting roles, and with gambling and merrymaking. Rules Thursday.

Jupiter is the fifth planet from the Sun and the largest in the Solar System. It is a giant planet with a mass one-thousandth that of the Sun, but two and a half times that of all the other planets in the Solar System combined. Jupiter is a gas giant, along with Saturn (Uranus and Neptune are ice giants). Jupiter was known to astronomers of ancient times. The Romans named it after their god Jupiter. On average, it is the third brightest object in the night sky after the Moon and Venus.

The planet Jupiter has been known since ancient times. It is visible to the naked eye in the night sky and can occasionally be seen in the daytime when the Sun is low. To the Babylonians, this object represented their god Marduk. They used Jupiter’s roughly 12-year orbit along the ecliptic to define the constellations of their zodiac.

The Romans named it after Jupiter (also called Jove), the principal god of Roman mythology, whose name comes from the Proto-Indo-European vocative compound Dyēu-pəter (nominative: *Dyēus-pətēr, meaning “O Father Sky-God”, or “O Father Day-God”). In turn, Jupiter was the counterpart to the mythical Greek Zeus, also referred to as Dias, the planetary name of which is retained in modern Greek.

Zeus was the sky and thunder god in ancient Greek religion, who ruled as king of the gods of Mount Olympus. Leader of the Olympian Gods; Jupiter means “Sky Father”. His name is cognate with the first element of his Roman equivalent Jupiter. Zeus is the child of Cronus and Rhea, the youngest of his siblings to be born, though sometimes reckoned the eldest as the others required disgorging from Cronus’s stomach. In most traditions, he is married to Hera, by whom he is usually said to have fathered Ares, Hebe, and Hephaestus.

Guru is a Sanskrit term that connotes someone who is a “teacher, guide or master” of certain knowledge. In pan-Indian traditions, guru is someone more than a teacher, traditionally a reverential figure to the student, with the guru serving as a “counselor, who helps mold values, shares experiential knowledge as much as literal knowledge, an exemplar in life, an inspirational source and who helps in the spiritual evolution of a student.”

The astronomical symbol for the planet, ♃, is a stylized representation of the god’s lightning bolt. The original Greek deity Zeus supplies the root zeno, used to form some Jupiter-related words, such as zenographic.

Jovian is the adjectival form of Jupiter. The older adjectival form jovial, employed by astrologers in the Middle Ages, has come to mean “happy” or “merry,” moods ascribed to Jupiter’s astrological influence.

The Chinese, Korean and Japanese referred to the planet as the “wood star”, based on the Chinese Five Elements. Chinese Taoism personified it as the Fu star. The Greeks called it Phaethon, “blazing.”

In Vedic astrology, Hindu astrologers named the planet after Brihaspati, the religious teacher of the gods, and often called it “Guru”, which literally means the “Heavy One.”

In the English language, Thursday is derived from “Thor’s day”, with Thor in Germanic mythology being the equivalent Germanic god to the Roman god Jupiter (mythology). The Roman day Jovis was renamed Thursday.

In the Central Asian-Turkic myths, Jupiter called as a “Erendiz/Erentüz”, which means (star)”. There are many theories about meaning of “eren”. Also, these peoples calculated the period of the orbit of Jupiter as 11 years and 300 days. They believed that some social and natural events connected to Erentüz’s movements on the sky.

This glyph represents the ascending crescent of the personality which is no longer confined to the material plane, which is why Jupiter moves beyond what you can actually see and finds gain.

Discover more about this grand planet…