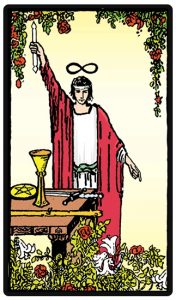 The Magician, or the impetus of power is in your favor. You have the potential to make things happen. You can masterfully invent, create and manifest anything you put your mind to. Make it happen. Make it work, Apply yourself and magic occurs. The key to taking control, is to have a vision and then take action. Your intention and your action are both required. When these two elements are aligned the real magic happens!

There are choices and directions to take. Guidance can arrive through one’s own intuition or in the form of someone who brings about change or transformation. This card can represent the ego or self-awareness. He can also represent the intoxication of power, both good and bad. it is an indication that we have more power than we realize to change our circumstances. It is a card that reminds us of our unlimited potential.

Start accumulating your resources you need to manifest your goals. They Universe is empowering you and this is one way for you to pay attention.  Stay focused, stay assured and apply your magic.

Cup: is a receptive vessel associated with the feminine and the element of water. The meaning of the cup will depend what is in it and whether it is upright or overturned.

Elements: The Magician is keenly aware that we are all born perfectly prepared to live our lives. We each have all the tools and resources within us to use at our whim. This is indicated by all the symbols of the suit shown within the Magicians grasp. The Magician realizes that he is the master of these tools, they are not his master. The Magician reminds us that everything we need to live our best life is available to us as long as we master the gifts of potential, and not become slaves to our circumstances. Air, in particular is commonly associated with the mind, soul and breath of life.

Pentacle: or sometimes referred to as “the coin”, represents the element Earth, general. The five points of the pentagram also represents the 5 elements (earth, fire, water, air, ether). This is a symbol for money, the material world, security and nature.

Rose: The mother of all flowers, rose signifies beauty of life and hope for the future. Red roses represent passion, action, masculine essence and blood. White roses represent spiritual purity and transformation. The five points or petals is a symbol of the union of four elements, plus the fifth element of ether (or spirit).

Sword: Represents the element of air. It is a symbol for the activities of the mind. Virtues including honor, rationality, communication and elimination are represented by the sword.

Uroboros: The serpent swallowing its own tail is symbolic of cycles, and is another message of the infinite nature of energy. The Magician tarot card meaning here, as with the Lemniscate, is that energy is endless, and our ability to manipulate energy is key. The Uroborus further signifies the concept of rebirth and regeneration. The Magician understands that rebirth occurs in each moment – hence another source of his power. Most importantly, it is a symbol that stands for the maxim “one is all” which is the highest philosophy for the Magician

Wand: Is a symbol of the element of fire. Wands represent inspiration, life force and motivation, power and desire. They are the connection between the spiritual and material.

Key Questions:
When the Magician card comes up:

Am I aware of my own power?
Am I recognizing my fullest potential?
Am I playing the role of victim or victor?
Am I using my power for good or abusing it?
Am I connecting to my higher source of energy?
Am I applying myself effectively and beneficially?
What action can I take to move into a better direction?
What resources are available to me, and how do I tap into them?

Characteristics: Innovative, logical, communicative, intellectual, witty. Creativity, skill, dexterity of hand, artistic, self-confidence, willingness. The Magician is also considered the <B>Juggler</B>, as his job is to effectively open the game of life! This trickster is shown with a table in front of him, representing stability and being grounded. Yet, on the table are items which represent both the elements and symbols of the Minor Arcana.

A Cup, sword, wand, pentacle and coin are actually all tools which do not symbolize stability or reality. So is the Magician pulling your focus from reality with his tools or is he showing you what can become distractions in your life from your intended goals? The infinity sign is either concealed in The Magician’s hat or floating above his head. With one hand raised, this suggests the notion of “as above, so below”. The Magician has the number of the male.