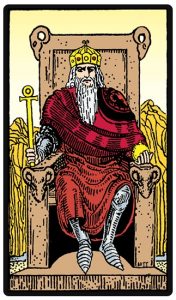 It is time to think logically and rationally about your situation.  Use your position to make the best and most intelligent choices for yourself or for your team or family. This card can be urging you to increase the stability in your life. Consider setting limits on your own behavior in order to reach your specific goals.

The Emperor Tarot card meanings are about advice, wisdom, authority, and grounding. The Emperor is the father figure and has obtained his wisdom through experience. He’s been through the wars, he’s ruled his people wisely, and he’s experienced all life can throw at him. This makes him an excellent source of wisdom and advice. When we pull this card in a reading we get an instant “grounding effect.”

In areas of business, we are encouraged to consider all the facts, revisit our strategic plans, reconsider our partnerships and re-evaluate our allegiances. When we are unsure of circumstances, the Emperor reminds us that sometimes “doing” is the only method we have for “knowing.” The Emperor is a master of his own making, and when he shows up in a reading, we would do well to realize our own inner strength and motivation is what makes us a leader.

Ankh: The Ankh or Tau Cross, is an Egyptian hieroglyph meaning “life”. This symbol is interpreted as the sun coming over the horizon, the male and female genitalia, the key to the gate of the afterlife and the union of heaven and earth.

Armor: represents preparation and protection. The person wearing armor anticipated challenges and is willing to fight for what is important to them.

Beard: As mentioned earlier, the Emperor has “been there, done that” and the beard is a symbol of his experience. As an archetype, we commonly see masculine figures of authority or father figures with long white beards. It reassures us that this man has acquired years of wisdom and experience – he is worthy of listening to because he’s seen first hand the effects of his own actions. He offers us the gift of his own life example – a short-cut, because when we heed the advice of our elders we can often avoid repeating the same mistakes.

Crown: representing the relationship with the divine, the crown is the intersection of consciousness and spiritual communication.

Ram: Featured prominently in most decks, the head of the ram is a symbol of determination, action, initiative, and leadership. The ram is also a symbol of Aries, which is the astral ruler of the Emperor. Aries is the first sign of the Zodiac, further reinforcing attributes of leadership, authority, and other forefather-type characteristics.

Key Questions
When the Emperor comes up:

Am I leading by example?
What kind of ruler am I?
Am I being inflexible? Too practical?
Do I need some advice on this situation?
Upon what resources am I calling in order to be the best leader?
What’s my strategy to accomplish these goals and are they realistic?

The Emperor represents the father to the Empress’ mother. Sometimes called the Cube Stone, The Emperor is a mirror image of the Empress card facing each other as a balanced pair of power and reflection. The shield too, has an eagle, but the eagle faces left which represents the unconscious mind. The Emperor also holds a scepter but his is erect or straight up representing the phallic symbol of male authority and his no-nonsense approach.