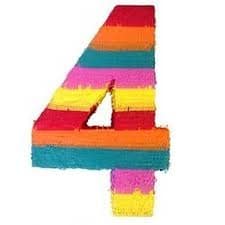 The Number Four: represents pragmatism, security and stability. This number represents solidity, persistence and determination. A hard worker with a practical mind geared toward the future, a person with the number four in their chart is the quintessential “head of the family” who looks after those he or she cares about.

The number four’s strengths are its steadfastness and tenacity; its weaknesses, rigidity and lifelessness. Along with that streak of practicality comes the tendency to be a bit of a bore. This is the numerical representation of steadfastness and reliability.

People who are 4s are known for being a solid person who is reliable and constant. Some of the top traits for a 4 include being firm, steady, hardworking, constant, practical, logical, loyal and permanent.

Fours can also exude some negative traits, which include stubbornness, jealousy, and they can also be argumentative.

Four – Vibrates to Uranus– ruler of Aquarius (Uranus is unconventionality, flashes of inspiration, awakening, disruption, independence). Mastering the laws of the earth and often involves hard work. Number of wholeness (as in a square). Many crystals have an extra four-sided facet, often diamond shaped, on their main termination face. Meditate or concentrate upon this four-sided facet and you will be able to find out about a particular lesson or goal in your life and how to accomplish it.