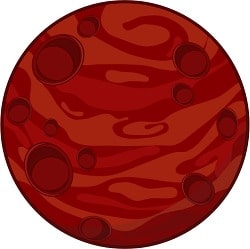 Mars is the fourth planet from the Sun and the second smallest planet in the Solar System, after Mercury. Named after the Roman god of war, it is often referred to as the “Red Planet” because the iron oxide prevalent on its surface gives it a reddish appearance. Mars is a terrestrial planet with a thin atmosphere, having surface features reminiscent both of the impact craters of the Moon and the volcanoes, valleys, deserts, and polar ice caps of Earth.

The existence of Mars as a wandering object in the night sky was recorded by the ancient Egyptian astronomers and by 1534 BCE they were familiar with the retrograde motion of the planet. By the period of the Neo-Babylonian Empire, the Babylonian astronomers were making regular records of the positions of the planets and systematic observations of their behavior. For Mars, they knew that the planet made 37 synodic periods, or 42 circuits of the zodiac, every 79 years. They also invented arithmetic methods for making minor corrections to the predicted positions of the planets.

In the fourth century BCE, Aristotle noted that Mars disappeared behind the Moon during an occultation, indicating the planet was farther away. Ptolemy, a Greek living in Alexandria, attempted to address the problem of the orbital motion of Mars. Ptolemy’s model and his collective work on astronomy was presented in the multi-volume collection Almagest, which became the authoritative treatise on Western astronomy for the next fourteen centuries.

Literature from ancient China confirms that Mars was known by Chinese astronomers by no later than the fourth century BCE. In the fifth century CE, the Indian astronomical text Surya Siddhanta estimated the diameter of Mars. In the East Asian cultures, Mars is traditionally referred to as the “fire star”, based on the Five Elements.

In ancient Roman religion and myth, Mars (Latin: Mārs, [maːrs]) was the god of war and also an agricultural guardian, a combination characteristic of early Rome. He was second in importance only to Jupiter and he was the most prominent of the military gods in the religion of the Roman army. Most of his festivals were held in March, the month named for him (Latin Martius), and in October, which began the season for military campaigning and ended the season for farming.

Ares (literally meaning “battle”) is the Greek god of war. He is one of the Twelve Olympians, and the son of Zeus and Hera. In Greek literature, he often represents the physical or violent and untamed aspect of war, in contrast to his sister the armored Athena, whose functions as a goddess of intelligence include military strategy and generalship.

In Jyotish (or Hindu) astrology, Mangala is the name for Mars, the red planet. He is the god of war and is celibate. He is considered the son of Bhumi, the Earth Goddess. He is the owner of the Aries and Scorpio signs, and a teacher of the occult sciences (Ruchaka Mahapurusha Yoga).

This glyph is the inverted symbol of Venus, where Mars is masculine (yang) energy and Venus is feminine (yin) energy. It is represents the cross of materialist with a directed energy overriding the circle of spirit. Mars is the yang side of our emotional nature.

Discover more about this planet…