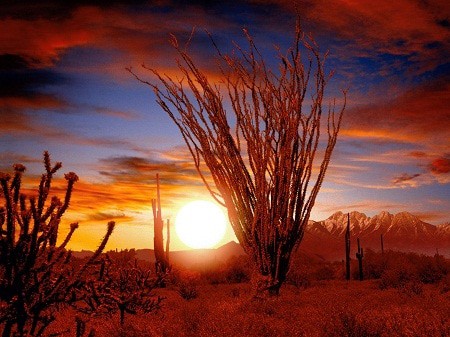 You can certainly call me a sun worshiper.  Being born on the Summer Solstice, I have always been attracted to the warmth, power and glow of the sun!  In this article, I have listed a few of my favorite experiences with the “setting sun”.

In my travels, I tend to be an observer.  These particular instances occurred on my first trip to the Tuscon Gem and Mineral show in Arizona, my visit to the island of Santorini and my subsequent return to Los Angeles for a visit, after living and working there as a dancer and choreographer.

“This was a sacred journey, which focused on sunsets! Before my first twilight in Arizona, I had spent the day gathering crystals to create a large mandala my mentor asked me to layout for a desert meditation at sunset. My mentor, Zachary invited several of his friends he knew from years past when he lived and studied in Tucson. We traveled West to a wonderful energy vortex about 15 minutes outside of town. I set up a healing mandala of quartz points in a large healing circle. I laid out four selenite wands, one for each direction.

In between the four directions of south, east, west and north, I laid handfuls of tumblestones to represent each element. Angelite for air, carnelian for fire, black tourmaline for earth and aqua aura for water. An inner circle was then created with spheres of septarian, rose quartz and golden calcite, topped with Atlantean pyramids. The six of us then sat within the inner circle holding gem quality Chakra Integrators. These are 7 faceted rainbow colored crystals layed out on a rare piece of Tibetan Quartz point. This type of quartz is a teacher of humanity. It clears all the Chakra centers. It is used to promote contact with the ancient cultures of the East, bringing knowledge concerning healing and spirituality to its user.

This was a silent, sunset meditation done within the crystal mandala circle as the Arizona sunset painted a picture across the desert floor. This sunset was a staggering burst of fire that flared up over the mountains. As the sun set, the play of light and shadow stretched across the desert floor, kissing the cactus as it began its introduction to the night. From the desert floor, the darker hues of the Chakra rainbow offered its cooling colors such as deep blue, intriguing indigo and vibrant violet washing over us as we ended the meditation.

The next sunset was probably the most beautiful exhibition of light and color I have ever seen in my life. We were leaving Tucson, flying at about 17,000 feet above ground. We were eye level with the mountains as the sun seemed to make a commanding, silent gesture that got everyone’s attention sitting on the side of the plane that was facing west. The sky looked as if it was ablaze with fire seeming to come from the mountains. As the sun gave its last peek over the ridge, the real show started. Large swatches of red-orange color splashed over green blue skies as yellow then merged with a deeper blue indigo over the mountain range. As the sun was completely out of sight now, the violet flame washed over the other rainbow colors creating a color palette I have never seen in the skies before! I could hear someone on the plane say, “the Arizona sunset… the most amazing spectacle in the world!” I had to agree.

Santorini is famous for its sunsets! I was inspired by this beautiful island in the southern Aegean Sea. I even created a breathtaking jewelry collection from my precious moments spent in the azure waters and multi-colored beaches! Famous for its white buildings and churches and some of the most eye-popping sunsets in the world, Santorini is a shining jewel in the Crown of the Greek Islands. Santorini is essentially what remains after an enormous volcanic eruption destroyed the earliest single island, and created the current geological caldera. Due to even more recent evidence, the island’s pre-eruption shape and landscape frescoes located under the ash, both strongly resemble Plato’s description of the lost city of Atlantis. A giant central, rectangular lagoon is surrounded by high, steep cliffs on three sides. It was from here, that I witnessed the sun relinquishing its reign, as it spilled into the cooling sea. As if it were exploding as it passed beyond the horizon, bright red and orange streaks pined upward as cooling indigo and violet rays washed across the apparent waterline!  It was a spectacular site and lived up to its infamous reputation. No matter what the appeal, this island embraces the magic and color of an endless summer!

Back in Los Angeles, my final sunset of the trip came at the top of Sunset Blvd. I was in a yoga class and the large windows of the studio faced west. The sun began setting over the Hollywood Hills as we did our final namaste and meditation. I was flooded with memories of my previous life and career as a choreographer here. The setting sun brought back the good experiences Los Angeles offered me in the early 90’s and as the sunlight diminished over the hills and the city lights started popping on like popcorn from the hot flames, I just remembered feeling forever grateful for all that has been offered me.”

Don’t forget to follow up with some more information on the sun!