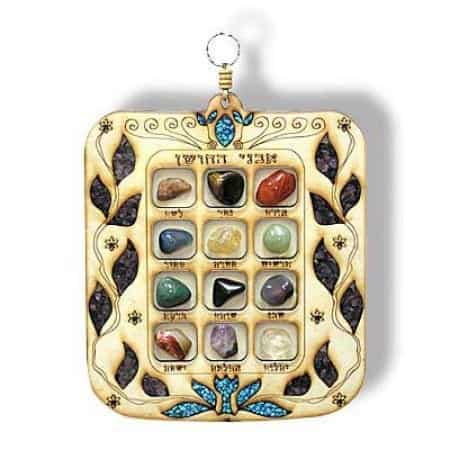 The power behind Earth’s minerals can be felt the minute you put a crystal in your hands or near your physical body. Crystals are the treasures of the earth. These stones are filled with energy to be used. So for this Holy week, I will be discussing some crystals with loving, spiritual connections.

Breastplate of Aaron
The Breastplate of Aaron is of interest to crystal lovers because it is an early account of the use of crystals for both symbolic and decorative reasons. The Breastplate of Aaron, High Priest of the Hebrews, and brother of Moses, was of great importance because by means of it, God revealed his Divine will to His chosen people. It was designed by God Himself and the directions as to how it was to be made were given to Moses (as illustrated in Exodus 28.) The original association of a special gem with each month was recorded in the Bible (Exodus 28 and 39). The twelve gems in the breastplate were later linked with the Signs of the Zodiac and later still, associated with the months in the year.

Staurolite – Fairy Cross
This mineral is a talisman of good luck! Historically, this stone is said to be formed from the tears of fairies when they were brought the news of the death of Christ. Formed in the shape of a cross, this amazing stone is beautiful and powerful on your alter or meditation space, around your neck or in your pocket. Represents four elements and joining of spirit with earth/matter. Spirituality, compassion, allowing, dis-attachment. Focus centered on the here and now. This stone provides protection and grounding energy and therefore, is most often used at the Root Chakra.

Fulgurite – The Finger of God
The lightning stone, fulgurites are some of the most powerful stones and along with the power of prayer, they can help to manifest one’s visions. Fulgurites have a high-frequency vibration and seem to hold a clear, strong resonance with the powerful electrical force that created them. Their extreme “lightning energy” is believed to be the touch of the Divine. This energy, which now resides in them, acts as a magnifier of one’s clearer intention, building a powerful resonance between oneself and the powers of the higher Universe. Fulgurites are powerful stones for grounding. Their energy can be used to arouse the Kundalini forces at the Root Chakra and move through each Chakra at every level of our light body, purifying and cleansing the entire system. The empowering energy from this stone opens the higher Chakras to Divine energy .

Bloodstone – The Martyr Stone
The martyr stone aptly named, due to the legend of this stone being at the foot of the cross and stained by the drops of blood from Jesus. Metaphysically, bloodstone is used to either promote a calm, tranquil atmosphere that is grounding or revitalize insufficient energy. A great stone for mental exhaustion. This stone represents both courage and strength and is used for achieving these attributes. It is associated with honesty and integrity and is useful in removing obstacles in life. A classic stone for wealth, it attracts abundance and good luck. Most effective on the Heart (green) and Root (red) Chakra.

Chiastolite – The Cross Stone
The “Cross Stone” is a variety of Andalusite. It exhibits the axis and angle in a different color from the rest of the crystal forming a natural cross. It is used as a sign of devotion towards awareness and dispels negativity. It signifies both death and re-birth and helps one to understand the realization of immortality. It is used as a bridge for “crossing over”. It helps one to assimilate during times of change. It provides insight to answers when problem solving. This powerful crystal balances one’s perspective in both creativity and practicality. During illness, it helps to maintain spirituality, lessens fever, balances blood flow, increases secretion of milk in nursing mothers and repairs chromosome damage.

Angelite – Angelic Connections
This stone is excellent at balancing, polarizing and aligning the physical body with the Aura or ethereal network. It is very calming and its shade of blue refreshes the eyes and spirit. This crystal helps us to be in touch with angels and animal guides, as well as assisting in distant communication with other humans. It is most associated with the Angelic Realm. Most effective on the Throat Chakra, Angelite helps in self expression, communication and allows us to speak our mind, helping us to become more assertive. Its soothing effects on the Throat Chakra works beautifully in calming and soothing anxiety or overactive children. Use this stone to call your Angels for guidance and support. Angelite is often used for psychic connection to oneness with the Universe, the angelic realm and for spiritual guidance.

Celestite gets its name from the sky. It’s gentle nature soothes nerves, reduces stress and quiets the mind. It allows us to find serenity, harmony and easiness. It creates stillness for receiving, therefore allowing us connection to spirit, life overview and creativity. Celestite increases self-expression, artistic creativity and healing. This stone helps the Throat Chakra by allowing for honesty, openness and listening. The celestial blue color helps reduce stress, worry and anxiety.

Learn more about the influence of crystals…