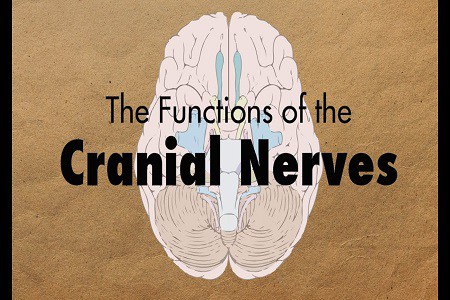 The 12 cranial nerves are sets or pairs of nerves that connect your brain to different parts of the head, neck, and torso. These nerves are each named for their function and/or structure. Each nerve also has a corresponding Roman numeral between I and XII which is based off the nerve location from front to back. Knowing where a nerve innervates and branches off towards can be a good diagnostics tool when trying to figure out pain and referred pain patterns, as well as routes of systemic symptoms. Here are the 12 nerves by name, location, and function:

II. The Optic Nerve, or Second Cranial Nerve, lies just Posterior and Inferior to the Medial Olfactory Tract. It carries information from the Eye for Vision and Ocular Reflexes.

III. The Oculomotor Nerve or Third Cranial Nerve, arises at the Ventral aspect of the MesenCephalon and transverses through the Cavernous Sinus to the Orbit. It supplies all the Intrinsic Ocular Muscles and all Extrinsic Ocular Muscles except for the Lateral Rectus and Superior Oblque. The ParaSympathetic Fibers from this Nerve innervate the Ciliary Muscle of the Lens and the Sphincter Muscle of the Pupil.

IV. The Trochlear Nerve or Fourth Cranial Nerve,supplies only the Superior Oblique Muscle of the Eye, and it arises just below the Inferior Quad-rigeminal Bodies of the Brain Stem. It emerges from the Posterior aspect of the Brain Stem and passes around the Lateral side of the Cerebellar Peduncle into the Margin of the Tentorium and into the Cavernous Sinus, where it goes to the Orbit.

V. The Trigeminal Nerve or Fifth Cranial Nerve, is the Largest Cranial Nerve, and it carries Fibers that give Sensation to the Face and Motor Fibers to the Muscles of Mastication. It exits from the Brain Stem through the Antero-Lateral surface of the Pons.

VI. The Abducent Nerve or Sixth Cranial Nerve, supplies the Lateral Rectus Muscle of the Eyeball and issues from the Brain at the Inferior border of the Pons, just above the Pyramid of the Medulla Oblongata.

VII. The Facial Nerve or Seventh Cranial,consists of two parts: The Motor Root, which supplies the Superficial Muscles of the Scalp, Face, and Neck. A smaller Sensory Root, which contains the Afferent Taste Fibers for the Anterior two thirds of the Tongue and the Afferent ParaSympathetic Fibers for supply of the Lacrimal and Salivary Glands The Facial Nerve arises from the Lateral aspect of the Ponto- Medullary junction.

VIII. The Auditory Nerve, or Eighth Cranial Nerve, is entirely Sensory, and consists of Vestibular and Cochlear divisions.

X. The Vagus Nerve, or Tenth Cranial Nerve is also a Mixed Nerve, which contains a large number of ParaSympathetic Fibers and passes through the Neck and Thorax into the Abdomen. It supplies Afferent Fibers chiefly to the Pharynx, Esophagus, Stomach, Larynx, Trachea, and Lungs. It’s attached by numerous Rootlets to the side of the Medulla Oblongata, in series with the Accessory Nerve below and the Glossopharyngeal Nerve above. The Rootlets unite to form a Single Tract, which exits from the Cranial Cavity through the Jugular Foramen.

XI. The Accessory Nerve, or Eleventh Cranial Nerve, consists of Bulbar and Spinal portions. It arises in series with the Vagus and Glossopharyngeal Nerve and controls Motor Function of the Sternomastoid and the Trapezius Muscles.

XII. The Hypoglossal Nerve or Twelfth Cranial Nerve, is a predominantly Efferent Nerve that supplies all the Muscles of the Tongue, both Intrinsic and Extrinsic, except the Palatoglossus Muscle. It arises from numerous Rootlets from the Anterior portion of the Medulla Oblongata. The Rootlets are arranged in double bundles and unite in the Anterior Condylar Canal, where they emerge from the Cranial Cavity.

There are several mnemonics or rhymes to help remember the 12 cranial nerves. Consider these:

“On Old Olympus Towering Tops A Finn and German Viewed Some Hops.”

“OOO to touch and feel a good vein, ah heaven.”

Next Up: Emergency Medicine: Choking