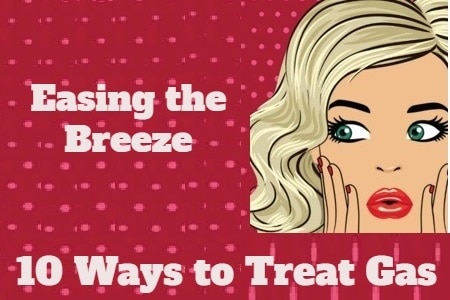 Everyone passes gas either by belching (burping) or flatulence (anally) But what are normal levels and what is considered excess gas? Most people experience belching, flatulence frequently and occasionally abdominal bloating and pain. On average, passing gas 15-20 times a day is considered normal. Gas is created in the digestive tract in two ways:

1. During regular activity, there is a certain amount of air that is swallowed while eating or speaking. Air collects in the stomach and is later released through belching. A small amount of this gas may make its way to the intestines, and may be released through flatulence.

2. During digestion, foods are broken down in the stomach and intestines by bacteria and enzymes. As food digests, certain gasses such as carbon dioxide, methane and hydrogen are produced. Flatulence and belching are usually odorless. However, some people do produce gas that contain sulfur due to the presence of certain bacteria in the large intestine, which can cause strong odor. Bloating, is not necessarily the body producing excess gas but rather that the person is excessively sensitive to the presence of gases in the body. Certain situations lend themselves to more gas:

1. Aerophagia: The swallowing of air.

2. Lactose intolerance: The inability to metabolize lactose, because of a lack of the required enzyme, lactase in the digestive system. it is estimated that 75% of adults show some decrease in lactase enzyme activity during adulthood.

3. Digestive disorders: All diseases that pertain to the gastrointestinal tract are labeled as digestive diseases. this includes diseases of the esophagus, stomach, the duodenum, jejunum, ileum, the ileo-cecal complex, large intestine and sigmoid colon.

5. Malabsorption: Poor absorption of food material by the small intestine.

Foods As A Trigger

While some foods can cause gas in some people, others may not have a problem. The usual suspects most people have trouble with are beans, cabbage, onions, pears, apples, peaches, milk and milk products. High carbohydrates foods rather than fats or proteins tend to cause gas. However, not everyone reacts in the same way to a particular food, so trial and error are advised. Certain enzymes stop being produced by the body as a person ages. This results in the product of excess gas from certain foods.

1. Eat slowly and chew and sip your food slowly. Gulping down your food leads to swallowing larger amounts of air, which may leave you feeling gassy later.

2. Smoking and excessive chewing of gum or sweets also cause you to swallow more air than you should be.

3. Do not overeat. With large amounts of food on your plate, you are more likely to eat all that is in front of you. When you know you are going out for a social gathering or meeting, do not overeat. When the stomach is full, it tries to ease the pressure by releasing trapped gas.

4. Avoid carbonated drinks, especially soda, seltzer or mixed drinks with tonics. P>5. Exercise regularly. This is a remedy for many physical ailments. A regular exercise routine can condition all the organs in the body, keeping you at optimum health.

6. Yoga is also a great way to improve the functioning of your digestive system.

7. Changing your diet by reducing foods like beans, cabbage and onions. Keep track of your diet for a week or two to make sure you’ve got the right culprit. Lactose intolerance and allergies to gluten could be a factor. Eliminate foods that you think might be contributing (dairy, gluten, grains) for a week and slowly add them back in and see if you can tell a difference.

Avoid sweeteners or health products containing artificial sweeteners like xylitol and sorbitol. Studies have shown that these products can double normal gas production by fueling the growth of bacteria in the large intestine.

9. Tea and even red wine are found to help prevent flatulence. Menthol in peppermint tea has shown to soothe the digestive tract.

10. Consider wearing clothes that are comfortable and not too tight. This will prevent you from feeling uncomfortable in case of bloating and also allow the free movement of gasses within the body.

Next Up: Celiac’s Disease