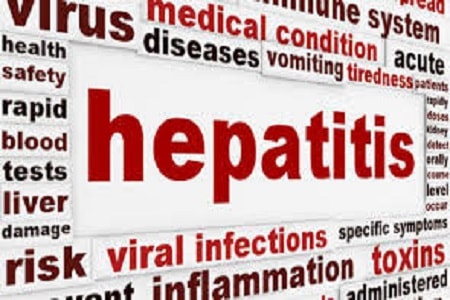 Hep B is a blood born and sexually transmitted liver disease caused by the hepatitis B virus (HBV). HBV is spread much like HIV, the virus that causes AIDS. HBV, however, is easier to catch than HIV because it is over 100 times more concentrated in an infected person’s blood and it can exist on surfaces outside the body. Transmission occurs via the inoculation of blood, blood products or other body fluids ( i.e., semen).

High risk groups include medical personnel, male homosexuals, and dialysis patients. The disease symptoms follow a long incubation period and presents with an insidious onset. The symptoms last from 2-12 weeks although subclinical infections can occur. 10% of the cases go on to a chronic state. In addition, 0.1-1% of the U.S. population are asymptomatic carriers of HBV and 8-10% are AB positive. Hepatitis B vaccination is a six month process. It is one shot a month for 2 months and then you wait 4 months to take the last shot.

Hepatitis A and hepatitis C are different diseases caused by different viruses. Hepatitis A occurs often from contaminated food. There is a vaccine for hepatitis A. Often you can receive the hep A and hep B vaccine together. There is no vaccine for hepatitis C. Non-A/Non-B Hepatitis (NANB) This disease is probably two different conditions caused by two different viruses (implied by patterns of incubation and symptoms). The causative agent is possibly a retrovirus. 90% of post-transfusion hepatitis cases are due to NANB. HBV is less common since blood screening is able to detect contaminated blood. NANB is responsible for about 20-30% of sporadic cases of hepatitis. Endemic and epidemic NANB can occur.

Symptoms follow a long incubation period (2-26 wk) and present with an insidious onset. Most cases are without jaundice (anicteric). There is a strong predilection for chronicity and a carrier state does exist although there is no current means for its identification. The transmission is similar to HBV and fecal-oral spread has not been documented. While all forms of hepatitis show an increase in SGPT (alanine amino transferase) and SGOT, Acute NANB classically produces a pattern of fluctuating enzyme elevation, i.e., remissions and exacerbations.

Hepatitis C, also known as “The Silent Epidemic” is the most common blood born pathogen in the world yet it was not even identified until 1989. It is known as the silent epidemic due to it’s slow progression, which occurs over many years. Four out of five people with Hepatitis C have no signs or symptoms and are completely unaware that they have the virus. A person infected with the virus may not have symptoms for up to two decades after they are infected. One of the most common causes of liver transplant in the United States is due to chronic hepatitis C in the later stages of the disease.

Previously referred to as non-A, non-B hepatitis or post transfusion hepatitis it is a viral disease that causes inflammation of the Liver and has infected 3.9 million Americans. Each year there are estimated to be 35,000 new cases. HCV is a small single strand RNA virus that penetrates a liver cell and replicates outside of the cell’s nucleus. It is an insidious disease that does not begin to show symptoms until liver damage has already occurred. It can literally take decades for the disease to create histological changes in the Liver leading to cirrhosis or hepatocellular carcinoma. Due to it’s insidious nature there are thousands of people who are infected yet unaware. The number of people infected with HCV are thought to be 170 million worldwide.

In the U.S. the numbers are surely underestimated because it is not mandatory to report Hepatitis C to the Centers for Disease Control and Prevention. Among the prison population alone there is a very high incidence of Hepatitis C, which is not included in the estimates. Illegal drug use makes up 60% of HCV transmission in the U.S. Risk of infection from occupational exposure through needle sticks and splashes makes up less than 4% of reported cases. The mode of transmission of HCV is through the blood. Therefore, the populations at highest risk are IV drug users sharing needles, health care workers involved in needle stick accidents and those who have received blood transfusions prior to 1992. Since 1992, the screening for HCV at blood banks has greatly reduced infection through blood transfusions. There is the possibilty of transmission of the Hepatitis C virus through sexual transmission or vertical transmission from mother to infant but these cases are rare. Retrieved July 1, 2003 from http://www.pegasys.com/basics/what c.asp

Diagnosis of HCV infection is determined by review of patient history, serological testing and liver biopsy. The first sign of a possible infection is an increase in enzymes found in healthy liver cells. AST and ALT are the two enzymes that indicate liver inflammation. ALT enzymes are produced by the hepatocytes and are therfore more specific for liver disease than AST. When they are damaged they will leak into the bloodstream and cause elevaated levels. Because AST is also present in muscle and brain tissue as well as liver tissue it is a less specific indicator of liver disease. For example, you will see high levels of AST in the early stages of a myocardial infaction. Most people infected with HCV don,t know that they carry the virus because they have no symptoms or very vague ones, which could be attributed to many other pathologies related to a high stress lifestyle. Some of the most common symptoms are fatigue and exhaustion, sometimes a fluike syndrome, muscle joint pain, nausea, stomach pain, and lack of appetite.

Cirrhosis may develop in 10-20% of HCV infected people but will take decades to develop. However, most people infected will not develop severe liver disease. Currently, Interferon is the only method of treatment for Hepatits C. The first trial of Interferon was reported in 1986. It reported that although Interferon was effective at low doses and was successful in reducing serum ALT levels it was associated with relapse when treatment was stopped which indicated that the virus was not eradicated. Only 15-20 % of patients sustained persistently normal ALT levels but there was still detectable viremia. It appears that Interferon therapy only cures infection in a small porportion of patients. This being so, the goal of Interferon therapy is to suppress infection in order to minimize, not eradicat liver disease. (3) July 1, 2003 http://cpmcnet.columbia.edu/dept/gi/ribavirin.html

The most recent breakthroughs in drug therapy have proven to be overwhelmingly positive. Direct-acting antivirals (DAAs) are currently the standard of care for chronic HCV infection. These drugs work by attacking HCV directly. These drugs are more targeted than older treatments such as interferons. They also don’t affect as many systems in your body as interferons, so they may not cause as many side effects. All DAAs are oral drugs.

All DAAs are given as combinations. Some combinations are made into single pills to make taking the medication easier. Brand names of current combination therapies include:

Ledipasvir-sofosbuvir (Harvoni)
Harvoni, which contains ledipasvir and sofosbuvir, is used to treat HCV genotype 1. It was approved in 2014.

Sofosbuvir-velpatasvir (Epclusa)
Epclusa, which contains sofosbuvir and velpatasvir, was approved in 2016. It can be used in combination with ribavirin in people with moderate to severe cirrhosis.

Epclusa was the first medication to treat all six HCV genotypes.

Sofosbuvir-velpatasvir-voxilaprevir (Vosevi)
The FDA approved Vosevi in 2017 to treat any HCV genotype. It contains the drugs sofosbuvir, velpatasvir, and voxilaprevir.

Vosevi is intended for use in people who’ve been treated with sofosbuvir, which didn’t work to treat hepatitis C.

Glecaprevir-pibrentasvir (Mavyret)
The FDA approved Mavyret in 2017 for use in the treatment of any HCV genotype. It contains glecaprevir and pibrentasvir.

In conclusion, the prognosis for most Hepatitis cases have a very promising outlook. Early detection is most helpful, but with the newer medications, the treatments can be just as helpful for long-term patients as for short-term.

Next up: Liver Cleanse