The Triduum of All Hallows 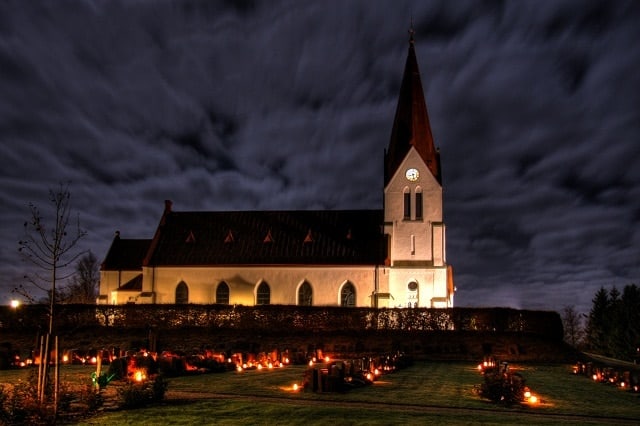 Hallowtide, also known as the Triduum of All Hallows are the three celebrations encompassing the observances of All Hallows’ Eve (Hallowe’en), All Saints’ Day (All Hallows’) and All Souls’ Day, which last from October 31 to November 2, annually. Hallowtide is a time to remember the dead, including martyrs, saints, and all faithful departed. The present date of Hallowmas (All Saints’ Day) and of its vigil (Hallowe’en) was established for Rome perhaps by Pope Gregory III (731-741) and was made of obligation throughout the Frankish Empire by Louis the Pious in 835. In the early 11th century, All Souls’ Day was popularized, after Abbot Odilo established it as a day for the monks of Cluny and associated monasteries to pray for the dead.

All Hallows’ Eve, most often called Halloween, is the eve of All Hallows (All Saints’ Day) and is the first day of the Hallowtide. According to some scholars, the Christian Church absorbed some of the Celtic practices associated with Samhain and Christianized the celebration in order to ease the Celts’ conversion to Christianity. Halloween originated from the Pagan festival, Samhain, celebrated among the Celts of Ireland, Great Britain. Irish and Scottish immigrants. They carried versions of the tradition to North America in the nineteenth century. On All Hallows’ Eve, it was traditionally believed that the veil between the material world and the afterlife was at its thinnest, therefore, this made it the best time to try contacting the dearly departed In order to prevent recognition by a soul, people would wear masks or costumes to disguise their identities.

Samhain is a time to remember, honor and commune with our ancestors. It is their wisdom and history which enriches our lives and gives us a clearer path to follow and emulate.This is a time to let old habits die and to meditate on who we wish to become. The Winter months are months to muse inward, seeking one’s Self. Spend this time in your studies, calm meditations and gentle reverie so that, come Spring, you may rise renewed, rejuvenated, fresh and whole. Learn more about this festive, fun celebration!

The second day of Hallowtide is known as All Saints’ Day, All Hallows or Hallowmas Occurring on November 1. It is a principal feast of the church year and one of the four days recommended for the administration of baptism in Anglicanism. In some denominations, All Saints’ Day is a holy day to honor all the saints and martyrs, both known and unknown.

The final day of Hallowtide is known as All Souls’ Day and is also called the Commemoration of All Faithful Departed. All Souls’ Day focuses on honoring all faithfully departed, especially family members and friends. The observance of All Souls’ Day was spread throughout Europe by Saint Odilo of Cluny in the late 13th century.Like All Hallows’ Eve and All Saints’ Day, family members often attend mass and visit the graves of their deceased loved ones, placing flowers and lighted candles there.

The term Halloween (and its alternative rendering Hallowe’en) is shortened from All-hallow-even, as it is the eve of “All Hallows’ Day”, also which is now known as All Saints’ Day. It was a day of religious festivities in various northern European Pagan traditions, until Popes Gregory III and Gregory IV moved the old Christian feast of All Saints’ Day from May 13 to November 1. In the ninth century, the Church measured the day as starting at sunset, in accordance with the Florentine calendar. Although All Saints’ Day is now considered to occur one day after Halloween, the two holidays were, at that time, celebrated on the same day. Liturgically, the Church traditionally celebrated that day as the Vigil of All Saints, and, until 1970, a day of fasting as well. Like other vigils, it was celebrated on the previous day if it fell on a Sunday, although secular celebrations of the holiday remained on the 31st. The Vigil was suppressed in 1955, but was later restored in the post-Vatican II calendar. Many European cultural traditions, in particular Celtic cultures, hold that Halloween is one of the liminal times of the year when spirits can make contact with the physical world, and when magic is most potent.