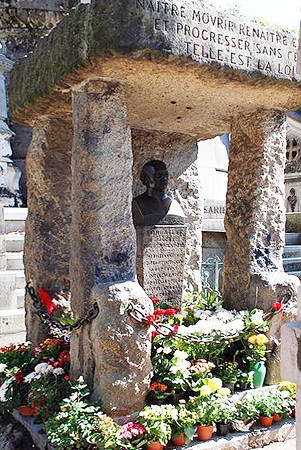 (July 10,2011)  I love Paris. Perhaps it is because of it’s air of romanticism, amazing architecture or incredible history, it is a city that keeps me in awe, every time I revisit. This trip was extra special as we had a purpose and that was to have lunch with Allan Kardec. He is known today as the man who arranged Spiritism according to a system. He systematized his scientific knowledge of these beliefs and therefore, he laid the foundation with the five books of the Gospel Explained by the Spiritist Doctrine. The fundamental tenets of Spiritism , according to Kardec, are found in his seminal work, Spirits’ Book and are two fold. The first is the belief in the existence of spirits or the non-physical beings that live in the invisible space around us (spirit world). The second, is the possibility of communication between these spirits and living people through mediumship.

It was Tonio who first introduced me to this incredibly interesting man, through his mystical writings and list of questions Kardec compiled to present to the spirit world. He published his first book on Spiritism, Spirits’ Book

. It is comprised of a series of 1,018 answered questions exploring matters concerning the nature of spirits, the spirit world, and the relations between the spirit world and the material world. He compiled a list of questions and began working with mediums and channelers to ask the spirits themselves. These answers are found in his book. This was followed by a series of other books, including The Mediums’ Book

, The Gospel According to Spiritism

, a periodical, the Revue Spirite, and The Book on Mediums: Guide for Mediums and Invocators

, which Kardec published himself.

Born, Hippolyte Leon Denizard Rivail, he took the name “Allan Kardec” after having a past life reading, where a spirit identified as Zefiro, told him about a previous incarnation of himself as a Druid priest by that name. Rivail liked the name so much he decided to use it as a pen name when writing his codex books in order to keep his Spiritists writings separate from his day job, which was writing basic books for high school students.

Sunday, July 10, 2011. It is a beautiful sunny day in Paris as we walk up the cobblestone street in Pere Lachaise, to see Allan Kardec. We have a petite picnic basket with a baguette, some, ham, cheese and red wine, of course. We have some delectable, sweet biscuits and we also carry with us a candle from the church of Notre Dame, a handful of flowers and wine glasses and I brought along some of my most favorite stones to boost the spiritual frequency and encourage my spirit guides.

As we come to his tomb, it is filled with hundreds of flowers. (It is reputed to be one of the most flowered at the Cimetiere. I think this is because he was known as a spirtual man.) A bust of Allan’s head sits centered on a pedestal with a huge slab of stone behind it and two stone pillars in front. There are flags and notes all around the well-kept grave site. Carved in the stone roof above is the phrase, “Naitre, mourir, renaitre encore et progresser sans cesse, telle est la loi” (“To be born, die, again be reborn, and so progress unceasingly, such is the law”).

Allan Kardec coined the word “spiritism“. Visitors from all over the world, especially from Brazil where his doctrine has a half million followers, come to pay homage at his tombstone.

Tonio approached the grave and felt “called” to the back of the monument where he placed his back against the stone and prayed. I went to the bust and placed my hand on the shoulder. The bronze statue was shiny from so many others connecting with his likeness. After a while, we sat in a space next to the tomb. We offered up the lit candle from Notre Dame, poured a glass of wine as we each placed a personal item together with the other offerings at the base of the pedestal.

I set up a spiritual mandala of blue kyanite in a large healing circle. I laid out four selenite chunks, one for each direction. In between, I laid handfuls of tumblestones in between to encourage my spirit guides, labradorite and sardonyx for protection, malachite for increasing the earth’s electromagnetic pulse, chiastolite, the “cross stone” for honoring both death and rebirth and infinite to clear the environment. I love to use these crystals to promote contact with entities which have passed in order to bring knowledge concerning healing and spirituality.

We sat and enjoyed our lunch. We met many people that day coming to see the place where the great spiritist was layed to rest. Tonio spoke Spanish and Portuguese to some of the inquirers and I was able to communicate in French to several others who came to lay flowers and flags at the foot of the stone. Although our cultures and languages were so different, our common thread was the spiritual attraction and psychological intrigue Allan had left us.

Update 10/17/11: On my second visit to the infamous spiritist, Allan Kardec, in Paris it had rained very hard the night before. The following morning I found about a pound of red and yellow picture jasper that was sitting on the damp surface of the ground in Pere Lachaise. This raw stones was laying everywhere near the resting place of Allan Kardec, which makes it’s metaphysical properties even more interesting. Its prophetic properties are psychically, very strong. I know you will enjoy these magical stones!