Know CPR and the Signs of a Heart Attack 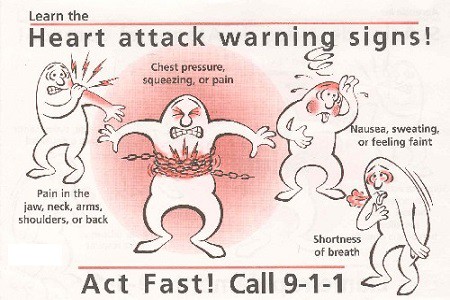 A blood clot is the most common cause of a blocked coronary artery. Usually, the artery is already partially narrowed by atheromas. An atheroma may rupture or tear, narrowing the artery further and making blockage by a clot more likely. The ruptured atheroma not only reduces the flow of blood through an artery but also releases substances that make platelets stickier, further encouraging clots to form.

Uncommonly, a heart attack results when a clot forms in the heart itself, breaks away, and lodges in a coronary artery. Another uncommon cause is a spasm of a coronary artery that stops blood flow. Spasms may be caused by drugs. Sometimes the cause is unknown.

Signs and Symptoms present as pain that is crushing, tightness, squeezing, band-like, radiating, cyanosis, sweating, cold, “clenching fist over heart”, pain in the ear, umbilicus, jaw, teeth, back, arm, hand pain (often on the ulnar side), autonomic response of vomiting, nausea or a feeling of impending doom.

Heart attack symptoms for women can be slightly different and present with a feeling of faintness, sudden heavy sweating, nausea, shortness of breath and a heavy pounding of the heart.

If you suspect a heart attack, seek emergency medical treatment immediately. Should a heart attack occur, you should go to the emergency room and seek help immediately. Time is of essence. Only examination by a doctor, who will administer an electrocardiogram (EKG) and/or a blood test, can confirm if you are having a heart attack.

The most important thing to do if you think you are having heart attack symptoms:

Dial 911 to call an ambulance or get to a hospital emergency room as quickly as possible so the doctor can examine and treat you.

Crush or chew a full-strength aspirin (swallow with a glass of water) to prevent further blood clotting.

Cardiopulmonary Resuscitation (CPR) is a combination of rescue breathing and chest compressions delivered to victims thought to be in cardiac arrest. When cardiac arrest occurs, the heart stops pumping blood. CPR can support a small amount of blood flow to the heart and brain to “buy time” until normal heart function is restored.

To learn CPR properly, take an accredited first-aid training course, including CPR and how to use an automatic external defibrillator (AED).

Before you begin, assess the situation before starting CPR:

Is the person conscious or unconscious?

If the person appears unconscious, tap or shake his or her shoulder and ask loudly, “Are you OK?”

If the person doesn’t respond and two people are available, one should call 911 or the local emergency number and one should begin CPR.

If you are alone and have immediate access to a telephone, call 911 before beginning CPR unless you think the person has become unresponsive because of suffocation (such as from drowning). In this special case, begin CPR for one minute and then call 911.

If an AED is immediately available, deliver one shock if advised by the device, then begin CPR.

In 2005, Dr. Alson Inaba, a pediatric emergency specialist at the University of Hawaii, discovered how music could make a powerful and life-altering connection. After the American Heart Association came out with new guidelines for CPR of Dr. Inaba wanted to get the word out that pushing hard and fast on the center on the chest yields the best results.

The Bee Gees song “Stayin’ Alive” has good reason to remember it: because it could save someone’s life. The 1977 disco hit has 103 beats per minute, a perfect number to maintain and retain the best rhythm for performing cardiopulmonary resuscitation (CPR).

The CPR-music connection: A small study by University of Illinois College of Medicine researchers in Peoria found that 10 doctors and five medical students who listened to the “Saturday Night Fever” song while practicing CPR not only performed perfectly, they remembered the technique five weeks later.

Participants in the study listening to the song performing CPR at the recommended rate, about 100 beats per minute. Five weeks later, without the music, they performed at 113 beats a minute, which is within an acceptable range.

Think ABC : Airway, Breathing and Circulation to remember the steps explained below. Move quickly through Airway and Breathing to begin chest compressions.

Put the person on his or her back on a firm surface. Kneel next to the person’s neck and shoulders. Open the person’s airway using the head-tilt, chin-lift maneuver. Put your palm on the person’s forehead and gently tilt the head back. Then with the other hand, gently lift the chin forward to open the airway.

Check for normal breathing, taking no more than five or 10 seconds: Look for chest motion, listen for breath sounds, and feel for the person’s breath on your cheek and ear. Gasping is not considered to be normal breathing.

BREATHING: Breathe for the person

Rescue breathing can be mouth-to-mouth breathing or mouth-to-nose breathing if the mouth is seriously injured or can’t be opened.

With the airway open (using the head-tilt, chin-lift maneuver) pinch the nostrils shut for mouth-to-mouth breathing and cover the person’s mouth with yours, making a seal.

Place the heel of one hand over the center of the person’s chest, between the nipples. Place your other hand on top of the first hand. Keep your elbows straight and position your shoulders directly above your hands.

Use your upper body weight (not just your arms) as you push straight down on (compress) the chest 2 inches (approximately 5 centimeters). Push hard and push fast give two compressions per second, or about 120 compressions per minute.

If the person has not begun moving after five cycles (about two minutes) and an automatic external defibrillator (AED) is available, apply it and follow the prompts.

If you’re not trained to use an AED, a 911 operator may be able to guide you in its use. Trained staff at many public places are also able to provide and use an AED.

Continue CPR until there are signs of movement or until emergency medical personnel take over.

Learn the secrets of a healthy heart!