How To Boost Testosterone Levels 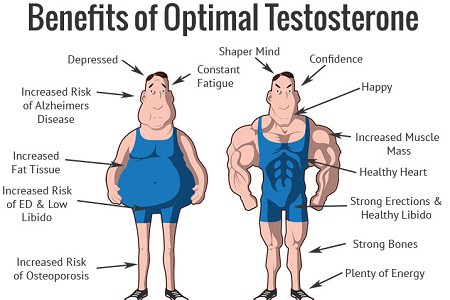 In men, symptoms of low testosterone may show as signs of hormonal issues such as changes in hair growth or sexual function. The quality, quantity, morphology and motility of a man’s sperm is also looked at.

Physical examination and routine laboratory tests for men include:

1. Hormone testing: a blood test is done to determine the level of testosterone and other male hormones.

3. Semen analysis: is the most important test for men. Your doctor will ask for one or more semen samples. The laboratory determines the number of sperm present and any abnormalities in the morphology and motility of the sperm. Sperm counts can fluctuate from one sample to the next.

4. Ultrasound: a transrectal and scrotal ultrasound can help the doctor look for evidence of conditions such as retrograde ejaculation and ejaculatory duct obstruction.

Factors that may decrease sperm:
Illness
Excessive Caffeine
Stress
Excessive alcohol consumption
Street and certain Prescription Drugs
Some over the counter medications
Injury to the testicles
Blockage in the Vas Deferens
Excessive Heat to the testicles
Vitamin Deficiencies
Varicocele:a varicose enlargement of the veins of the spermatic cord that may cause infertility through a significant decrease in the quality and quantity of the sperm.

A variety of factors can result in low testosterone, including infertility in men. Approximately 25% of infertility is directly due to the male partner. Low sperm count or anatomical abnormalities are often the two main reasons for male issues.

Several other factors can contribute to this including exposure to excessive heat or fever, radiation, toxins, alcohol consumption or acute injury or testicular injury. Anatomical abnormalities such as an endocrine disorders or varicocele, a diluted vein of the spermatic cord can also cause a problem. Varicocele can be treated successfully with surgery. Environmental exposures, smoking, and use of recreational drugs (e.g., marijuana, cocaine, hashish) may reduce sperm count or cause abnormal sperm morphology. If there are no anatomical abnormalities then here are ways to improve sperm:

1. Reduce Your Heat: Men with low sperm counts are often advised to optimize the temperature of the testes as sperm production is slightly lower than body temperature. The reason the testes hang away from the body in the scrotum. Remedy this by wearing looser “bikini-style” underwear, do not use your lap top directly on the knees and avoid frequent use of hot tubs and steam .

2. Drink Less Alcohol : Excess alcohol consumption is associated with a decrease in the percentage of normal sperm.

3. Eat More Organic: A study done with members of the Organic Farmers’s Association suggesting that organically grown foods may enhance sperm count. Sperm count was more than twice as high in these men as in a control group of workers.

4. Get Acupuncture: Acupuncture was used on 28 men twice a week for 5 weeks and compared to men who received no treatment. Following acupuncture, a statistically significant increase in the percentage and number of sperm in the total ejaculate was observed (in comparison with controls), with improvements in the shape. Also progressive motility in ejaculate increased from 44.5% to 55% following acupuncture treatment.

This is one of my favorite prescriptions I give my male patients. These three supplements are only natural. One is plant based, the other is a natural steroid hormone produced by the adrenal glands and the third is an omega fatty acid. They must be taken together, twice a day for 30 days. The results will be so great that you will want to continue this protocol, but I would only recommend doing this only 6 months apart (twice a year).

1. DIM (diindolylmethane) is a plant compound called an indole and has been shown to help regulate and promote a more efficient metabolism of estrogen, and an optimal ratio of estrogen metabolites. DIM balances estrogen levels, promoting health and well-being. This powerful phytonutrient is found in broccoli, cauliflower, cabbage and brussels sprouts, unlike other phytonutrients like soy isoflavones, has no hormonal properties in itself. Standard dosage is 1 pill, twice a day.

2. Dehydroepiandrosterone (DHEA) is a natural steroid hormone, one of the hormones produced by the adrenal glands. After being secreted by the adrenal glands, it circulates in the bloodstream as DHEA-sulfate (DHEAS) and is converted as needed into other hormones. DHEA is chemically similar to testosterone and estrogen and is easily converted into those hormones. DHEA production peaks in early adulthood and declines in production with age in both men and women. Therefore, many diseases which correlate with age also correlate with low levels of DHEA production. Standard dosage is 100 mg twice a day.

Another favorite combination of supplements I recommend for long term use are my Male Performance formula. Take this all natural herbal combination, four pills, twice a day. Along with this, take 2,000 mg of L-Arginine (one of the best male amino acids) in divided doses (1,000 mg), twice a day. (Take up to 3 months at a time. Take a break for a month and then go back on the 3 month regime.)

Vitamin C research suggests it may prevent sperm from “clumping” together and that it increases sperm count. Superoxide dismutase and glutathione – research shows that these and other antioxidants may improve sperm quality. Dose: 1,000 mg twice a day.

Vitamin E supplementation with this antioxidant has been shown to increase sperm motility and to enhance the ability of the sperm to penetrate the egg in test-tube studies. Dose: 400 IU daily. Talk to your doctor prior to starting Vitamin E, particularly if you are currently taking aspirin or other blood thinners.

Zinc is an essential nutrient for proper sperm production. A deficiency may result in lowered testosterone levels.. The usual recommended dosage of zinc is about 15 to 30 mg daily, coupled with 1 mg of copper for balance. Too much zinc can be toxic. Do not exceed a dose of 15 to 30 mg daily This mineral is found in great amounts in the outer layer of sperm and plays an important role in the production of the hormone testosterone.

Vitamin B12: Take 1000 mcg daily. A B-12 deficiency reduces sperm motility and sperm count. Even if no deficiency exists, B-12 supplementation may help men with a sperm count of less than 20 million per milliliter or a motility rate of less than 50% Zinc and B Vitamins (B6, B12, and folic acid) are critical nutrients in the male reproductive system for proper hormone metabolism, sperm formation and motility.

L-Carnitine (Yin and Blood tonic) especially enhance sperm count. Researchers have found that L-carnitine is found in much greater amounts in sperm tissues than other cells. Preliminary studies suggest that L-carnitine and acetyl-L-carnitine may be able to stimulate sperm motility in certain situations. The role of L-carnitine on sperm maturation and sperm quality however, is still unclear. Several clinical studies have evaluated the effect of L-carnitine on men with a low sperm count, a reduction/loss in sperm movement, or men with both conditions. These studies have evaluated only small numbers of men who took oral carnitine supplements for varying lengths of time. Some patients enrolled in these studies experienced increased sperm counts and/or increased sperm motility. Take 3-4 grams daily. Required for normal sperm function.

Ginseng: increases production of testosterone and helps with sperm production. Avoid if you have high blood pressure or Yin deficiency (with heat signs).

The Problem with Low Motility and Morphology

Guaifenesin (natural source is Beechwood) can improve motility by thinning out the semen allowing for sperm to swim up stream easier. Vitamin C and Zinc can also help. Guaifenesin has been used for years as a cough remedy and mucus thinner.  A small study suggests 600 mg of extended relief tablets or 3 teaspoons (200 mg per tsp) per day of Guaifenesin were used, particularly the brand name product Robitussin®

The importance of a healthy diet cannot be overstated. Our amazing machine, the reproductive system requires the proper vitamins and minerals. Nutritional deficiencies can impair hormone function, inhibit sperm production, and contribute to the production of abnormal sperm. If you can not muster up the ability to get on a routine and eat a diet rich in green vegetables and colorful fruits, then at the very least, take a good multi-vitamin daily!

Include consumption of legumes and soy (which are a high in phytoestrogens and phytosterols).

Pumpkin seeds are naturally high in zinc and essential fatty acids, as well as olive oil, which are vital to healthy functioning of the male reproductive system.

Eat 1/4 to 1/2 cup a day of pumpkin seeds to help maintain a healthy reproductive system.

Get more tips on Men’s Health