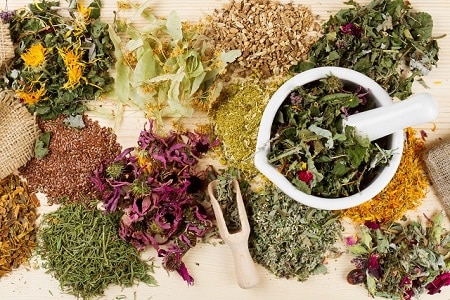 Traditionally, herbs have been used for cleansing for centuries. These herbs can be utilized when dry, for creating a sense of purity, renewal and divine clearing! Simply light a bit of these herbs and waft the smoke around an area you wish to clear of unwanted scents, negative energy or to simply start a new day with.

Using a natural receptor such as a sea shell, abalone shell or crystal bowl can be a place to place your herbs after you are done using them.

Here is a list of some of the most famous and most popular herbs used (in order of their importance.)

Sweet Grass: (Hierochloe odorata) has the most sacred usage of all the purification herbs. It is a seasonal plant and grows only in certain places. Sweetgrass can be found growing wild in wet meadows, low prairies, the edges of sloughs and marshes, bogs, shaded stream banks, lakeshores, and cool mountain canyons. Sweet grass is used primarily for the blessing of one’s self. It is also used in prayer, smudging or purifying ceremonies and consider it a Sacred plant. It is usually braided, dried, and burned.

Sage: (Sapius or Sapere) which means “to taste, to discern, to be wise”, from Proto-Indo-European. The noun meaning “man of profound wisdom” is used for smudging and blessing of homes and Sacred places. It is commonly used in tea, smoking pipes, sweat lodge ceremonies and smudge pots. Sage grows in many varieties and can be found all over the world.

Cedar: (Cedrus Atlantica) is considered by some tribes as the “tree of life” because it withstands the four elements year round no matter how harsh the seasons are. It is one of the planet’s oldest trees.

Sandalwood: (Santalum) or sacred wood, is the name of a class of fragrant woods from trees which are unlike many other aromatic woods because they retain their fragrance for decades. Sandalwood oil is extracted from the wood for use.

Frankincense: (Olibanum) is an aromatic resin used in incense and perfumes, obtained from trees of the genus Boswellia in the family Burseraceae. It was one of the sacred herbs given to the Child of Bethlehem.

Myrrh: (Myrrha) is a fragrant gum resin obtained from certain trees and used, especially in the Near East, in perfumery, medicines, and incense. Myrrh was used by the ancient Egyptians, used in the First and Second Temples at Jerusalem, and according to the book of Matthew 2:11, gold, frankincense and myrrh were among the gifts to Jesus by the Biblical Magi “from the East”.

Opium: (Lachryma Papaveris) or poppy tears, are a dream associated flower. Opium is a good incense to burn for any spell involving dreaming or to initiate peaceful sleep. This sacred flower is said to induce lucid dreaming and increase prophetic dreams. It’s also a good incense to burn to help bring you into a meditative state.

Palo Santo: (sacred wood) is a revered wood from the Amazon used primarily for burning in order to clear evil spirits, negative energy and keep insects away. This fragrant wood

Nine Sacred Woods: Are considered a Celtic tradition of blending the 9 most Sarcred trees or Ogham. The Ogham is an early Medieval alphabet used primarily to transcribe the early and late period, Irish language. The Ogham is sometimes called the Celtic Tree Alphabet, traditionally ascribing names of trees to the individual letters. The first nine letters represent the 9 most sacred woods including ~ Birch, Rowan, Ash, Alder, Willow, Hawthorn, Oak, Holly, Hazel.

Lavender: (Lavandula) is probably one of the most healing herbs on the planet. Soothing and relaxing. Used for calming the mind, peaceful sleep and dream recall.

Rose Buds: (Rosa, Rosaceae) considered the Mother of All Flowers, roses have a special place in healing the heart. Use for love, trust and self-acceptance.

Copal: (Amba) or copal resin is amber tree resin. It has been used for centuries for honoring the heavens. The resin or sap from trees becomes hardened and weathered over time. As it drips from the tree, it often catches other bark, tree materials and insects in its path. This adds to its quality and revered status.

Dragon’s Blood: (Dracaena, Daemonorops) is a bright red resin that is obtained from different species of a number of distinct plants and palms. This root is usually cut and then soaked for long periods of time to drawn the redness from its core. It is then often mixed with resin or a powdered base to form a thick paste. Fragrance is sometimes mixed into the paste and then dried. Use for positive intention, purification and strength.

Sea salt: (Sal de Mer or Halite) although not an herb, sea salt is one of the most popular tools used for cleansing, preserving and ritual ceremonies. Sea salt is salt produced from the evaporation of seawater, rather than by being extracted from sedimentary deposits. It is also used in cooking and cosmetics. It is called bay salt or solar salt. Like mineral salt, production of sea salt has been dated to prehistoric times. It has been used in protective circles, cleansing bad spirit energies and purifying the energy around you.

Scents have a deep influence on the human psyche. They bring back memories and reinforce hidden qualities. Incense possess specific properties and qualities, which can be used to bring about a particular effect on a person’s psyche.

Here are ideas for use:

* pour out the jar of herbs into a bowl to decorate/accent any altar, meditation space or room in your home.

* burn as incense by using a teaspoon of herbs on a hot charcoal disk (included), in your incense burner.

* decorate tops of candles, accentuate seasonal wreaths or stir into a soothing bath.

* smudge any room, altar, or sacred space to clear away negative energy.

* create and charge your own healing oils by adding a pinch of herbs.

* create a seasonal simmer by adding 2 teaspoons of herb to gently boiling water.

* make beautiful bath salts by adding a teaspoon to sea salt and a few drops of your favorite oil.

* cast a handful right into your fireplace or bonfire to draw in positive intentions, releasing the wonderful scents into the air.

The term “smudging” simply means cleansing or purifying. Often, once the herbs were lite, the shaman or healer would touch the herbs (smudge) into an area or on a person they wanted cleansed or protected. It is just as affective to waft the smoke from the herbs around the area you are working in, by passing the herbs around or using a feather or feather fan to “spread” the smoke where it is needed.

Always use a heat proof container to burn your incense. Vessels such as cauldrons, sea shells or ceramic bowls have been used. Some incense can get VERY hot. Hot enough to shatter a glass burner or glass table top! Be sure your container will catch any falling ash and that the surface that your container will be sitting on is insulated from any heat. A favorite of mine is a large ceramic bowl, filled with sand. The sand insulates the bowl and table surface from the heat of the incense.

Always  keep your incense away from your pets, children, draperies, or anything that might ignite because it comes into contact with fire. Always be sure that your incense are completely extinguished before you dispose of the ashes. Ashes from charcoal, in particular, can remain hot for many hours after the charcoal “burns out”. This is a possibility for all types of incense. Make sure that your incense is cold to the touch, before disposing of the remains.

Enjoy your incense. Use them for cleansing, a room, an area or yourself or someone else. Use them just for their fragrance or for relieving stress and anxiety.

Enjoy them during a meditation session or on your altar.

Enjoy their power as they can allow you to bring your intentions into the world.

After smudging with your incense, close your eyes and simply sit with the new, cleansed space. Use your sense of smell to remind you of the clarity associated with this scent. Let go of any negativity on each long exhale. Allow this transition time to be a reassuring, positive experience. When you are ready, slowly open your eyes.

Learn more about the power of cleansing…