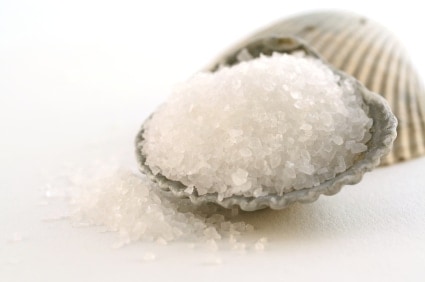 Salt is one of the easiest most effective remedies on the planet! Sea salt, a salt obtained by evaporating seawater, is used in cooking and cosmetics. Its mineral content gives it a different taste from table salt, which is usually sodium chloride refined from mined rock salt (halite), or refined from sea salt. Table salt may contain anti- caking agents and additives such as the dietary supplement iodides. Areas that produce specialized sea salt include the Cayman Islands, France, Ireland, Sicily and Apulia in Italy, and Maine and Cape Cod in the United States.
Salt is essential for life and you cannot live without it. There are enormous differences between the standard, refined table and cooking salt and healthy natural salt. The differences can have a major impact on your health.

Halite crystal (sodium chloride) occurs in seawater, along with other salts of sodium, calcium, magnesium, and other light metals. When seawater evaporates in a closed lagoon, halite and other minerals precipitate out and sink to the bottom as crystals. In this way, great beds of rock salt have been formed. Pure halite is colorless, though it is often colored by impurities. It is soft and breaks (cleaves) into cubes. Halite crystallizes in the isometric (also called cubic) crystal system and when it forms crystals, it generally forms cubes. Its most noticeable and important physical feature is that halite is readily soluble in water. This allows halite to be useful in such varied applications as cooking, food preservation, and chemical production.

Salt can be mined from rock salt either by traditional mining practices using heavy equipment underground, or by pumping hot water in pipes into the salt deposit, where the hot water dissolves the halite. The resulting salt water is then pumped to surface and evaporated to yield salt. This is called “solution mining”. In some modern dry salt lakes, a crust of halite can be recovered by simply scraping the salt crust off the lake bottom with bulldozers or scrapers. Ancient rock salt is mined in Michigan, New York, Kansas, and other states. Solution mining is used to recover salt from underground “salt domes” in Louisiana and Texas. Recovery of salt from dry lakes takes place in the deserts of California, Nevada, and Utah.

Table salt is actually 97.5% sodium chloride and 2.5% chemicals such as moisture absorbents, and iodine. Dried at over 1,200 degrees Fahrenheit, the excessive heat alters the natural chemical structure of the salt causing the potential for many health problems in your body. Table salt is not recommended in your healing arsenal.

This salt is unparalleled in the world. Less than 1% of the world’s salt harvest has the quality of Celtic Sea Salt. Pure, moist, biologically active, and free from any chemicals or additives, this is considered “living sea salt”. Celts discovered a way to harvest salt from the ocean using the sun, the wind, and shallow clay ponds. Pristine ocean channels spiral water into the concentrating ponds. The live flowing mixture is carefully stirred by the salt farmer, and dazzling crystals form and are gathered by hand. The ionizing action of the clay, combined with the artisan’s skillful method, passed down through generations, enlivens the unique, bioavailable array of trace elements that exist in a perfectly balanced matrix.

This salt is a rich source of magnesium. Magnesium helps to regulate the activity of more than 325 enzymes and performs a vital role in orchestrating many bodily functions, from muscle control and electrical impulses to energy production and the elimination of harmful toxins. Epsom Salt also delivers sulfates, which are extremely difficult to get through food but which readily absorb through the skin. Sulfates serve a wide variety of functions in the body, playing a vital role in the formation of brain tissue, joint proteins and the mucin proteins that line the walls of the digestive tract. Sulfates also stimulate the pancreas to generate digestive enzymes and are believed to help detoxify the body’s residue of medicines and environmental contaminants. Soak in a tub full of hot water with a few cups of Epsom Salts. This is good for relaxing muscles and drawing toxins from the body. When magnesium sulfate is absorbed through the skin, such as in a bath, it draws toxins from the body, sedates the nervous system, reduces swelling, relaxes muscles, is a natural emollient, exfoliator, and much more. Soak for 15-20 minutes.

Himalayan Crystal Salt is salt in its native form, with all its vibrational energy intact and it helps your body return to a state of balance. Not having balanced electrolytes shifts your body out of homeostasis – the balance of chemicals that is conducive to the body’s function. The renowned Frezenius Institute in Europe analyzed the Himalayan Crystal Salt and proved that it has an amazing array of important trace minerals and elements including potassium, calcium and magnesium that help your body achieve balance by restoring fluids and replenishing your supply of electrolytes whenever you sweat heavily.

The healing abilities of salt water are profound and well documented. Salt water is an astringent and speeds wound healing. Floating in sea water is an extreme release of tension and stress of the day. Allow yourself to float weightlessly in the water. You deserve it.

Deep breathing of ocean air helps us to relax and let go. The faint smell of salt in the air can take us to a place of pure joy. Sea air has a certain aliveness found no where else. This deep breathing can help release tension and the problems associated with it.

Thalassotherapy (from the Greek word thalassos, meaning “sea”) is the medical use of seawater. The properties of seawater are believed to have beneficial effects upon the pores of the skin. Thalassotherapy was developed in seaside towns in France during the 19th century. Trace elements of magnesium, potassium, calcium sulphates and sodium, found in seawater, are believed to be absorbed through the skin. The therapy is applied in various forms, as either showers of warmed seawater, application of marine mud or of algae paste, or the inhalation of sea fog. Spas make hot seawater and provide mud- and seaweed wrapping services available.

Acute sinusitis occurs when bacteria invade the sinus cavities and impair proper drainage of mucus from the sinuses to the nose. Chronic inflammation of the nasal passages or rhinitis also can lead to sinusitis. Allergic rhinitis or hay fever is the most common cause of chronic sinusitis and is a frequent cause of acute sinusitis.

The common cold is the most prevalent predisposing factor to sinusitis. Acute sinusitis typically causes symptoms of nasal congestion and a thick yellow or green discharge. Other symptoms include tenderness and pain over the sinuses, frontal headaches, and sometimes chills, fever, and pressure in the area of the sinuses.

Entering bacteria gets trapped and filtered out by mucus and minute nasal hairs called cilia. This air-flow system can sometimes slow down when something impedes the cilia, if a cold clogs the sinus openings, or if an allergen swells the sinus linings. Then air gets trapped, pressure builds, the mucus stagnates, and bacteria breed. Infection sets in and you have sinusitis. When you get clogged up, you may end up with a permanent thickening of the sinus membranes and chronic congestion.

Flush out nasal secretions. Mix 1 teaspoon of non-iodized salt or sea salt with 2 cups of warm water and a pinch of baking soda. Pour it into a shot glass, tilt your head back, close one nostril with your thumb, and sniff the solution with the open nostril. Then blow your nose gently. Repeat on the other side.

An Ayurvedic solution, similar to this is done in the same manner with a Neti Pot. It looks similar to a tea pot, but with a longer, narrower spout for the nostrils. These can be found in most health food stores.

A cup or handful of water in your hand or neti pot is a wonderful cleansing therapy. Slowly inhale the salt water into your nose to cleanse your sinus and open up the air passages. Over the counter nasal washes (not nasal sprays) are available. The simplest form is a non iodized salt water spray.

The tissues in the mouth can benefit greatly from sea salt.

For bleeding gums – make a paste of 1 tsp. baking soda to 1/2 tsp. sea salt…brush with this mixture 3 times per day instead of the toothpaste. You can also add a few drops of tea tree oil.

Gargle with warm salt water a few times a day to relieve a sore throat, mouth sores or canker sores.

Thoroughly Mix all dry ingredients, then drizzle Glycerin and EO’s over them. Mix them well and store in an air tight container for several days prior to use. Mix well.

Add 1/4 cup or more under running water. Light a candle or incense and Enjoy.

Fill the tub with water

Add to bath water, stir until dissolved. Bath in water for at least 20 minutes

Place all ingredients in a hot bath and bathe for 20 Minutes Drink plenty of water. This bath withdraws impurities from your body and helps you to feel better. This bath can be done 2 to 3 times in a week or as needed.

Use on knees and elbows in the shower and rinse off. Pat dry with a soft towel.

Cleansing with sea salt is a safe and effective way to clear any space of negative energy. Sea salt is obtained by evaporating seawater. Salt occurs naturally in many parts of the world as the mineral halite and as mixed evaporates in salt lakes. Underground salt deposits are found in both bedded sedimentary layers and domal deposits.

Energy in itself, is the vital source, which radiates from everything and everyone around us. When we are ill, emotionally upset, angered or imbalanced, our moods and of course, our energy is altered. Coming in contact with energy that is negative can often be sensed, even felt. The result is often a feeling of uneasiness, confusion or an opposed feeling to our current state of mind.

Cleansing a room with salt can be done by placing salt in small bowls and placing them in the 4 corners for 24 hours. Take two teaspoons of sea salt and dissolve it into some warm water. Pour it into a mister or spray bottle and spray it where ever you need cleansing.

Cleansing yourself of negative vibs can be done by misting yourself for an overall clearing. Draw a bath. As the hot water is filling the tube, add two or more tablespoons of sea salt to the running water and stir it so it dissolves in the tube. Relax in your bath for 15-20 minutes.

Cleansing your crystals can be done by placing a teaspoon of sea salt into a bowl of luke warm water. Make sure the salt is dissolved, then place your crystals in the water for twenty four hours.

Learn more about the power of salt…