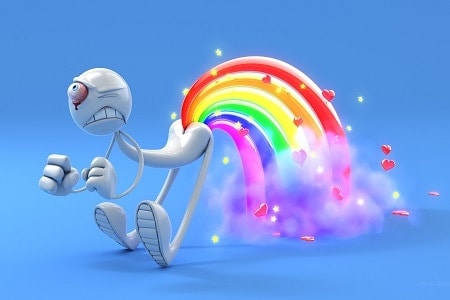 Diarrhea is the frequent passing of loose or watery stools. Acute diarrhea, appears rapidly and may last from one to ten days. Chronic diarrhea lasts much longer and is the second cause of childhood death in the developing world. Diarrhea is sometimes accompanied by abdominal cramps or fever. It may be caused by infection, allergy, or could be a sign of a serious disorder, such as IBD (inflammatory bowel disease), which is Ulcerative Colitis or Crohn’s disease.

Secretory diarrhea occurs when the gut is secreting more fluids than usual, or it cannot absorb fluids properly. In such cases structural damage is minimal. This is most commonly caused by a cholera toxin – a protein secreted by the bacterium Vibrio cholera.

Osmotic diarrhea occurs when too much water is drawn into the bowels. This may be the result of celiac disease, pancreatic disease, or laxatives. Too much magnesium, vitamin C, undigested lactose, or undigested fructose can also trigger osmotic diarrhea.

Motility-related diarrhea is caused by the rapid movement of food through the intestines (hypermotility). If the food moves too quickly there is not enough time to absorb sufficient nutrients and water. Patients who had a vagotomy (removal or severing of the vagus nerve) as well as those with diabetic neuropathy are susceptible to this type of diarrhea.

Dysentery, in general, is the presence of blood in the stools is usually a sign of dysentery, rather than diarrhea. Dysentery is caused by a release of excess water caused by an antidiuretic hormone from the posterior pituitary gland. Dysentery is one of the symptoms of Shigella, Entamoeba histolytica, and Salmonella.

This is usually caused by an infection, and is also a symptom of a bowel infection when the stomach and the intestines become inflamed (gastroenteritis).

This may be caused by:

1. A virus – most commonly a norovirus or a rotavirus. It could also be caused by a hepatitis virus, or the herpes simplex virus. Viral diarrhea spreads easily.

2. A bacteria – if food or water is contaminated bacteria and parasites can be transmitted into the body. Parasites may include Giardia lamblia and cryptosporidium. Examples of bacteria are campylobacter, salmonella, shigella and Escherichia coli (E. coli). Traveler’s diarrhea is usually caused by bacteria or parasites. Researchers at Boston University School of Medicine identified the structure of bacteria responsible for traveler’s diarrhea.

3. An antibiotic – antibiotics can disturb the natural balance of bacteria in our intestines, which can lead to infection, commonly with a bacterium called Clostridium difficile.

The following may also be causes of acute diarrhea:

Remember: B.R.A.T. diet
Bananas, Applesauce, Rice and Toast (dry)….these are known foods to bulk up stools when sick or have diarrhea.

In the vast majority of cases the diarrhea will disappear within a week or so. Before it does, the following steps may help ease symptoms:

1. Drink plenty of fluids: diarrhea often carries a risk of dehydration, especially if it includes vomiting. It is important to make sure babies and children are getting plenty of fluids.

2. Diarrhea may affect the balance of: salts and electrolytes in the body. Special dehydration drinks can be bought in a pharmacy to restore their balance. A pharmacist can advise on which drinks to consume.

3. Eat as soon as you feel up to it: doctors used to tell people not to eat until the symptoms went away. They now recommend patients start with foods such as pasta, bread, rice or potatoes, foods high in carbohydrates, as soon as possible. Add a bit of salt to the food to replace salt loss. Avoid foods that are high in fat.

5. Breastfeeding or bottle: feeding babies doctors recommend that feeding continue as normal if the baby has diarrhea. If necessary, add rehydration drinks that are bought from a pharmacy.

6. Painkillers: for fever or headache doctors recommend Tylenol (paracetamol) or ibuprofen. If you have kidney, liver or long-term stomach problems do not take ibuprofen. Do not give aspirin if your child is under 16 years of age.

7. Probiotics: these are supposed to treat diarrhea, among other things. However, a study published in the British Medical Journal indicated that some of them don’t work, while others do. Doctors may prescribe specific medications, depending on the results of the stool test.

1. Hand washing: regular hand washing with soap and warm water helps reduce the risk of catching or passing on germs. Especially after going to the toilet, playing with pets, gardening, and before touching food. An intensive program of handwashing education and promotion in Pakistan decreased the incidence of diarrhea by more than 50 percent among children, according to a study.

2. Keeping the kitchen and toilets: as clean as possible also reduces the risk. When handling raw meats wash your hands before touching other things, such as other foods, work surfaces, cutlery, etc.

3. If you are traveling: to a warm country remember that uncooked foods are more likely to have bacteria than hot food. Depending on where you are, it is sometimes advisable to avoid having ice in your drinks if you are not sure where the water to make the ice came from.