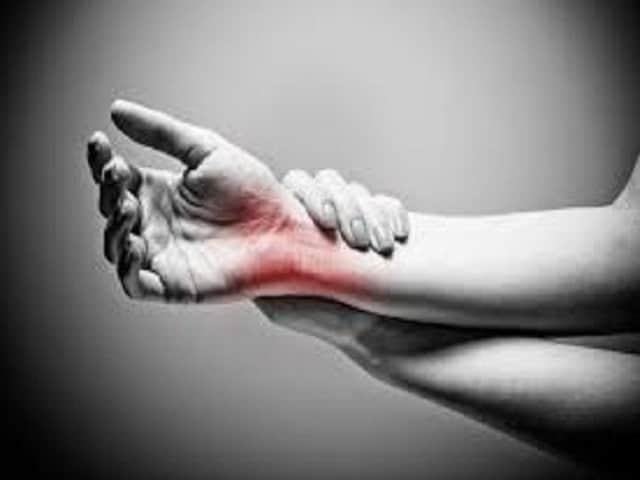 Carpal tunnel syndrome occurs when tendons or ligaments in the wrist become enlarged, often from inflammation, after being aggravated. The narrowed tunnel of bones and ligaments in the wrist pinches the nerves that reach the fingers and the muscles at the base of the thumb. The first symptoms usually appear at night. Symptoms range from a burning, tingling numbness in the fingers, especially the thumb and the index and middle fingers, to difficulty gripping or making a fist, to dropping things.

Carpal tunnel syndrome is often the result of a combination of factors that increase pressure on the median nerve and tendons in the carpal tunnel, rather than a problem with the nerve itself. Most likely the disorder is due to a congenital predisposition – the carpal tunnel is simply smaller in some people than in others. Other contributing factors include trauma or injury to the wrist that cause swelling, such as sprain or fracture; overactivity of the pituitary gland; hypothyroidism; rheumatoid arthritis; mechanical problems in the wrist joint; work stress; repeated use of vibrating hand tools; fluid retention during pregnancy or menopause; or the development of a cyst or tumor in the canal. In some cases no cause can be identified.

There is some clinical data to prove that repetitive and forceful movements of the hand and wrist during work or leisure activities can cause carpal tunnel syndrome. Repeated motions performed in the course of normal work or other daily activities can result in repetitive motion disorders such as bursitis and tendonitis. Writer’s cramp – a condition in which a lack of fine motor skill coordination and ache and pressure in the fingers, wrist, or forearm is brought on by repetitive activity – is not a symptom of carpal tunnel syndrome.

Early diagnosis and treatment are important to avoid permanent damage to the median nerve. A physical examination of the hands, arms, shoulders, and neck can help determine if the patient’s complaints are related to daily activities or to an underlying disorder, and can rule out other painful conditions that mimic carpal tunnel syndrome.

The wrist is examined for tenderness, swelling, warmth, and discoloration. Each finger should be tested for sensation, and the muscles at the base of the hand should be examined for strength and signs of atrophy. Routine laboratory tests and X-rays can reveal diabetes, arthritis, and fractures.

Physicians can use specific tests to try to produce the symptoms of carpal tunnel syndrome.

The Tinel test, the doctor taps on or presses on the median nerve in the patient’s wrist. The test is positive when tingling in the fingers or a resultant shock-like sensation occurs.

The Phalen Test, or wrist-flexion, test involves having the patient hold his or her forearms upright by pointing the fingers down and pressing the backs of the hands together. The presence of carpal tunnel syndrome is suggested if one or more symptoms, such as tingling or increasing numbness, is felt in the fingers within 1 minute. Doctors may also ask patients to try to make a movement that brings on symptoms.

Often it is necessary to confirm the diagnosis by use of electrodiagnostic tests. In a nerve conduction study, electrodes are placed on the hand and wrist. Small electric shocks are applied and the speed with which nerves transmit impulses is measured. In electromyography, a fine needle is inserted into a muscle; electrical activity viewed on a screen can determine the severity of damage to the median nerve. Ultrasound imaging can show impaired movement of the median nerve. Magnetic resonance imaging (MRI) can show the anatomy of the wrist but to date has not been especially useful in diagnosing carpal tunnel syndrome.

Before surgery, you may want to consider other less invasive measures:

Complete recovery can occur and we can avoid reinjury by changing the way we do repetitive movements, the frequency with which we do the movements, and the amount of time we rest between periods when they perform the movements.

Carpal tunnel work may contribute to carpal tunnel syndrome: knitting, sewing, or needlepoint; cooking and housework; TV computer games and home computer work; playing sports or cards; and hobbies or projects like carpentry or using power tools for extended periods of time. You should also take frequent breaks and examine the tools you use at home that could be causing strain on your hands. You may need to wear a wrist splint at night, while playing sports, or when working at home. The wrist splint assists in maintaining the wrist in a neutral or straight position and allows the wrist to rest.

1. Place the right palm at the wall, spreading your fingers equally. Extend your elbow and press the palm fully into the wall. Wait a few breaths and then turn your head to the left, bringing the tip of the right shoulder blade in towards the front of your body. Hold and breathe.

2. Bring your palms together in front of your chest in a prayer position stretching all the fingers fully. Relax your shoulders. Slowly stretch the heel of your palms down until they are the level of your wrists. If you can do this stretch without discomfort you can increase the stretch by moving the hands over to the right and holding for a few breaths. Repeat to the left. Stretch slowly and carefully, observing the sensations of your forearm and wrist.

3. Make fists of your hands and place them, thumb up, on the desk top . Support your lower arm on the desk. Slowly stretch the fist to the right, without moving your lower arm, and then to the left. Lift your arms off the desk top and make slow circles with your wrist, keeping your hands in closed fists. Circle both directions. Release your fingers and place them, tips up, on the edge of your desk. Press into the desk with the fingers. Try this first with the fingers together and then spread apart.

4. Place the index finger on the edge of your desk, keeping your wrists straight. Gently push into the desk and hold for a few breaths. Repeat with all the fingers except the thumb.

5. Place your right palm on the desk top with your wrist straight. Relax all your fingers. With your left hand slowly stretch the right thumb away from the forefinger. Hold for a few breaths and then release and do the other hand.

Chiropractic – has shown to be effective for carpal tunnel syndrome.

Carpal Tunnel and Yoga – Yoga has shown to reduce pain and improve grip strength among patients with carpal tunnel syndrome.

Carpal tunnel release is one of the most common surgical procedures in the United States. Generally recommended if symptoms last for 6 months, surgery involves severing the band of tissue around the wrist to reduce pressure on the median nerve. Surgery is done under local anesthesia and does not require an overnight hospital stay. Many patients require surgery on both hands. The following are types of carpal tunnel release surgery:

Open release surgery: the traditional procedure used to correct carpal tunnel syndrome, consists of making an incision up to 2 inches in the wrist and then cutting the carpal ligament to enlarge the carpal tunnel. The procedure is generally done under local anesthesia on an outpatient basis, unless there are unusual medical considerations.

Endoscopic surgery: may allow faster functional recovery and less postoperative discomfort than traditional open release surgery. The surgeon makes two incisions (about ?” each) in the wrist and palm, inserts a camera attached to a tube, observes the tissue on a screen, and cuts the carpal ligament (the tissue that holds joints together). This two-portal endoscopic surgery, generally performed under local anesthesia, is effective and minimizes scarring and scar tenderness, if any. One-portal endoscopic surgery for carpal tunnel syndrome is also available.

Although symptoms may be relieved immediately after surgery, full recovery from carpal tunnel surgery can take months. Some patients may have infection, nerve damage, stiffness, and pain at the scar. Occasionally the wrist loses strength because the carpal ligament is cut. Patients should undergo physical therapy after surgery to restore wrist strength. Some patients may need to adjust job duties or even change jobs after recovery from surgery.

Percutaneous balloon carpal tunnel-plasty: is an experimental technique that can ease carpal tunnel pain without cutting the carpal ligament. In this procedure, a ?-inch cut is made at the base of the palm. The doctor then inserts a balloon through a catheter under the carpal ligament and inflates the balloon to stretch the ligament and free the nerve. Patients in one small study of pertucaneous balloon carpal tunnel-plasty reported relief of symptoms with no postoperative complications; most of them were back to work within two weeks. This experimental technique is not yet widely available.

To reduce the inflammation associated with CTS, one or more of the following fatty acids and herbal extracts may be taken:

-Super GLA/DHA contains a balanced blend of essential fatty acids. Three softgels daily contain 450 mg of GLA from borage oil and 500 mg of DHA and 200 mg of EPA from marine lipid extract. Up to 6 softgels may be taken daily.

-Mega EPA contains 400 mg of EPA and 300 mg of DHA in each softgel capsule. Up to 8 softgels may be taken daily for therapeutic purposes.

The proper synergy of vitamins and minerals controls free-radical damage that increases pain and inflammation:

-Vitamin B Complex, 3 capsules daily. This dose should provide at least 75 mg of vitamin B6 in the total daily dose.

Protein-digesting enzymes such as protease, bromelain, trypsin, lipase, pancreatin, and papain have significant anti-inflammatory effects. One or more of the following nutrients may be considered:

-Super Digestive Enzymes containing protease, lipase, cellulase, and amylase from pancreatin; 2 capsules at the beginning of each meal.

-Bromelain Powder enhances protein absorption and turnover, including protein found in joint tissue. The suggested dosage is 1/8-1/4 tsp with each meal.

-Papain Powder aids in protein digestion and repair. The suggested dosage is 1/8-1/4 tsp with each meal.

-Magnesium is often deficient from the diet. It is important for arterial health and has a relaxing effect.

-Phosphatidylserine (PS) improves neurotransmitter functioning and enhances the metabolism of cellular energy throughout the body. One 100-mg capsule daily is suggested.