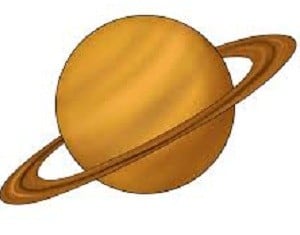 Saturn is associated with the principles of limitation, restrictions, boundaries, practicality and reality, crystallizing, and structures. Saturn governs ambition, career, authority and hierarchy, and conforming social structures. It concerns a person’s sense of duty, discipline and responsibility, and their physical and emotional endurance during hardships. Saturn is also considered to represent the part of a person concerned with long-term planning.  Rules Saturday.

Saturn is the sixth planet from the Sun and the second-largest in the Solar System, after Jupiter. It is a gas giant with an average radius about nine times that of Earth. Although only one-eighth the average density of Earth, with its larger volume Saturn is just over 95 times more massive. Saturn is named after the Roman god of agriculture; its astronomical symbol (♄) represents the god’s sickle.

Saturn has a prominent ring system that consists of nine continuous main rings and three discontinuous arcs and that is composed mostly of ice particles with a smaller amount of rocky debris and dust. Sixty-two moons are known to orbit Saturn, of which fifty-three are officially named. This does not include the hundreds of moonlets comprising the rings. Titan, Saturn’s largest moon, and the second-largest in the Solar System, is larger than the planet Mercury, although less massive, and is the only moon in the Solar System to have a substantial atmosphere.

Saturn has been known since prehistoric times. In ancient times, it was the most distant of the five known planets in the Solar System (excluding Earth) and thus a major character in various mythologies. Babylonian astronomers systematically observed and recorded the movements of Saturn. In ancient Roman mythology, the god Saturnus, from which the planet takes its name, was the god of agriculture. The Romans considered Saturnus the equivalent of the Greek god Cronus. The Greeks had made the outermost planet sacred to Cronus and the Romans followed suit. (In modern Greek, the planet retains its ancient name Cronus—Κρόνος: Kronos.)

The Greek scientist Ptolemy based his calculations of Saturn’s orbit on observations he made while it was in opposition. In Hindu astrology, there are nine astrological objects, known as Navagrahas. Saturn, one of them is known as “Shani” and judges everyone based on the good and bad deeds performed in life.

In Greek mythology, Cronus was the leader and youngest of the first generation of Titans, the divine descendants of Uranus, the sky, and Gaia, the earth. He overthrew his father and ruled during the mythological Golden Age, until he was overthrown by his own son Zeus and imprisoned in Tartarus. God of Agriculture Leader/Ruler of the Titans; Saturn means “Father Time”.

Shani dev is one of the Navagraha (the nine primary celestial beings in Hindu astrology) of Jyotiṣa. Shani dev is embodied in the planet Saturn and is the Lord of Saturday. Shani dev is also known as Śanaiścara. God of “Duty”. Punishes the person who does not do his/her duty properly. Saturn (Shani) is the planet associated with ambition, authority, commanding status, discipline, patience, honor, toughness, but also with pessimism, hardships, and fatalism.

Ancient Chinese and Japanese culture designated the planet Saturn as the “earth star”. This was based on Five Elements which were traditionally used to classify natural elements.

In ancient Hebrew, Saturn is called ‘Shabbathai’. Its angel is Cassiel. Its intelligence or beneficial spirit is Agiel (layga) and its spirit (darker aspect) is Zazel (lzaz).

In Ottoman Turkish, Urdu and Malay, its name is ‘Zuhal’, derived from Arabic زحل.

Saturn in astrology is the ruling planet of Capricorn and, traditionally, Aquarius.

Saturn, the Bringer of Old Age is a movement in Gustav Holst’s The Planets.

The Saturn family of rockets were developed by a team of mostly German rocket scientists led by Wernher von Braun to launch heavy payloads to Earth orbit and beyond. Originally proposed as a military satellite launcher, they were adopted as the launch vehicles for the Apollo program.

The day Saturday is named after the planet Saturn, which is derived from the Roman god of agriculture, Saturn (linked to the Greek god Cronus).

Saturnalia was an ancient Roman festival in honor of the deity Saturn, held on 17 December of the Julian calendar and later expanded with festivities through to 23 December. The holiday was celebrated with a sacrifice at the Temple of Saturn, in the Roman Forum, and a public banquet, followed by private gift-giving, continual partying, and a carnival atmosphere that overturned Roman social norms. The Neoplatonic philosopher Porphyry saw the festival’s theme of liberation and dissolution as representing the “freeing of souls into immortality”.  According to Porphyry, the Saturnalia occurred near the winter solstice because the sun enters Capricorn, the astrological house of Saturn, at that time.

This glyph represents the cross of the material plane over the crescent of the personality. The glyph shows why Capricorn’s, who are ruled by Saturn, are the most materialistic sun sign.