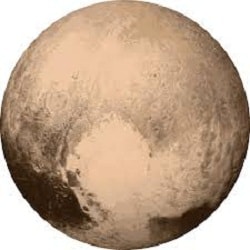 Pluto is called “the great renewer”, and is considered to represent the part of a person that destroys in order to renew, through bringing buried, but intense needs and drives to the surface, and expressing them, even at the expense of the existing order. A commonly used keyword for Pluto is “transformation”. It is associated with power and personal mastery, and the need to co-operate and share. Rules Tuesday.

Pluto is the ruling planet of Scorpio and is exalted in Virgo. In Roman mythology, Pluto is the god of the underworld and of wealth. The alchemy symbol was given to Pluto on its discovery, three centuries after Alchemy practices had all but disappeared. The alchemy symbol can therefore be read as spirit over mind, transcending matter. The symbols were chosen given the close association with Mars which has a similar symbol.

Pluto takes 248 years to make a full circuit of the zodiac, but its progress is highly variable: it spends between 15 and 26 years in each sign.

Its entry in Cancer in 1913, the sign in which it was later discovered, coincided with World War I. It is also associated with nuclear armament, which had its genesis in the research of the 1930s and 40s. Later on, it gave rise to the polarized nuclear stand off of the Cold War, with the mass consumer societies of the United States and other democracies facing the totalitarian state of the USSR. The discovery of Pluto also occurred just after the birth of modern psychoanalysis, when Freud and Jung began to explore the depths of the unconscious.

In real life events and culture, Pluto has been a major astrological aspect. When it comes to art, movements like Cubism and Surrealism began to de-construct the “normal” view of the world. In medicine, Pluto is seen to be associated with regenerative forces in the body involving cell formation and the reproductive system. The majority of traditional astrologers do not use Pluto as a ruling planet, but do use the planet for interpretation and predictive work, obliquely making reference to projections of influences from higher to lower dimensional spaces. Pluto is considered by modern astrologers to be the primary native ruler of the 8th House.

Hades was the ancient Greek god of the underworld, which eventually took his name. In Greek mythology, Hades was regarded as the oldest son of Cronus and Rhea, although the last son regurgitated by his father. He and his brothers Zeus and Poseidon defeated their father’s generation of gods, the Titans, and claimed rulership over the cosmos. Hades received the underworld, Zeus the air, and Poseidon the sea, with the solid earth available to all three concurrently. Hades was often portrayed with his three-headed guard dog Cerberus and, in later mythological authors, associated with the Helm of Darkness and the bident.

Yama or Yamarāja, also called Imra,is a god of death, belonging to an early stratum of Rigvedic deities. In Sanskrit, his name can be interpreted to mean “twin”. In the Zend-Avesta of Zoroastrianism, he is called “Yima”. According to the Vishnu Purana, his parents are the sun-god Surya and Sanjna, the daughter of Vishvakarman. Yama is the brother of Sraddhadeva Manu and of his older sister Yami, which Horace Hayman Wilson indicates to mean the Yamuna. According to Harivamsa Purana her name is Daya. There is a one-of-a-kind temple in Srivanchiyam, Tamil Nadu dedicated to Yama. In the Vedas, Yama is said to have been the first mortal who died. By virtue of precedence, he became the ruler of the departed, and is called “Lord of the Pitrs”.

This glyph represents a small circle over a crescent sitting on a cross, which is similar to Neptune. Pluto is a higher octave of Mars, which is why Mars also rules Scorpio.

Learn more about the influence of Pluto