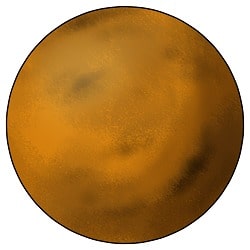 Venus is associated with the principles of harmony, beauty, balance, feelings and affections, and the urge to sympathize and unite with others. It is involved with the desire for pleasure, sensuality, personal possessions, comfort, and ease. It governs romantic relations, marriage and business partnerships, sex, the arts, fashion, and social life.  Rules Friday.

Venus is the second planet from the Sun, orbiting it every 224.7 Earth days. It has no natural satellite. It is named after the Roman goddess of love and beauty. After the Moon, it is the brightest natural object in the night sky. Because Venus is an inferior planet from Earth, it never appears to venture far from the Sun. Venus is a terrestrial planet and is sometimes called Earth’s “sister planet” because of their similar size, mass, proximity to the Sun and bulk composition. It is radically different from Earth in other respects.

The pentagram of Venus is the path that Venus makes as observed from Earth. The path creates a sacred geometric pattern of concentric circles.

A long-standing mystery of Venus observations is the Ashen light, an apparent weak illumination of its dark side, seen when the planet is in the crescent phase. The first claimed observation of ashen light was made in 1643, but the existence of the illumination has never been reliably confirmed. Observers have speculated it may result from electrical activity in the Venusian atmosphere, but it could be illusory, resulting from the physiological effect of observing a bright, crescent-shaped object.

Venus was known to ancient civilizations both as the “morning star” and as the “evening star”, names that reflect the early assumption that these were two separate objects. The Venus tablet of Ammisaduqa, believed to have been compiled around the mid-seventeenth century BCE, shows the Babylonians understood the two were a single object, referred to in the tablet as the “bright queen of the sky”, and could support this view with detailed observations.

The Ancient Greeks thought of the two as separate stars, Phosphorus and Hesperus. Pliny the Elder credited the realization that they were a single object to Pythagoras in the sixth century BCE, while Diogenes Laertius argued that Parmenides was probably responsible. The Romans designated the morning aspect of Venus as Lucifer, literally “Light-Bringer”, and the evening aspect as Vesper, both literal translations of the respective Greek names.

Venus is the Roman goddess whose functions encompassed love, beauty, sex, fertility, prosperity and desire. In Roman mythology, she was the mother of the Roman people through her son, Aeneas, who survived the fall of Troy and fled to Italy.

Aphrodite is the Greek goddess of love, beauty, pleasure, and procreation. She is identified with the planet Venus. As with many ancient Greek deities, there is more than one story about her origins.

Shukra (Śukra), the Sanskrit for “clear, pure” or “brightness”, is the name of the son of Bhrigu, and preceptor of the Daityas, and the guru of the Asuras, identified with the planet Venus, one of the Navagrahas. He presides over Friday. He is of white complexion, middle-aged and of agreeable countenance. he is described variously as mounted on a camel, horse or crocodile. he holds a stick, beads and a lotus and sometimes a bow and arrow. The mentor of Asuras, he is associated with fertility and enthusiasm. Always helped demons in the war against gods.

The transit of Venus was first observed in 1032 by the Persian astronomer Avicenna, who concluded Venus is closer to Earth than the Sun and established Venus was, at least sometimes, below the Sun. In the 12th century, the Andalusian astronomer Ibn Bajjah observed “two planets as black spots on the face of the Sun”, which were later identified as the transits of Venus and Mercury by the Maragha astronomer Qotb al-Din Shirazi in the 13th century.

Galileo’s discovery that Venus showed phases (although remaining near the Sun in Earth’s sky) proved that it orbits the Sun and not Earth When the Italian physicist Galileo Galilei first observed the planet in the early 17th century, he found it showed phases like the Moon, varying from crescent to gibbous to full and vice versa. When Venus is furthest from the Sun in the sky, it shows a half-lit phase, and when it is closest to the Sun in the sky, it shows as a crescent or full phase. This could be possible only if Venus orbited the Sun, and this was among the first observations to clearly contradict the Ptolemaic geocentric model that the Solar System was concentric and centered on Earth.

This glyph is the upright symbol of Mars, where Venus is feminine (yin) energy and Mars is masculine (yang) energy. It is represented by the circle of spirit over the cross of matter. It represents the spirit overcoming matter through Love. Venus is the yin side of our emotional nature.