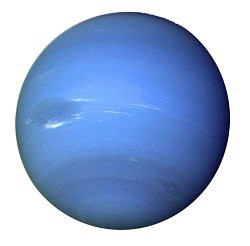 Neptune is associated with idealism and compassion, but also with illusion, confusion, and deception. Neptune governs hospitals, prisons, mental institutions, and any other place, such as a monastery, that involves a retreat from society. Its appearance coincided with the discovery of anesthetics and hypnotism. Modern astrologers consider Neptune the ruler of Pisces.  Rules Friday.

In Roman mythology, Neptune was the god of the sea, identified with the Greek Poseidon. The demand for a mythological name seemed to be in keeping with the nomenclature of the other planets, all of which, except for Earth, were named for deities in Greek and Roman mythology.

Poseidon was one of the twelve Olympian deities of the pantheon in Greek mythology. His main domain was the ocean, and he is called the “God of the Sea”. Additionally, he is referred to as “Earth-Shaker” due to his role in causing earthquakes, and has been called the “tamer of horses”. He is usually depicted as an older male with curly hair and beard.

Varuna is Sanskrit for Varuṇa, Malay, and is the Hindu god of water and the celestial ocean, as well as a god of law of the underwater world. A Makara is his mount. His consort is the Hindu goddess Varuni. Originally the chief god of the Vedic pantheon, Varuna was replaced by Indra and later faded away with the ascendancy of Shiva and Vishnu.

Most languages today, even in countries that have no direct link to Greco-Roman culture, use some variant of the name “Neptune” for the planet; in Chinese, Japanese and Korean, the planet’s name was translated as “sea king star”, because Neptune was the god of the sea. In modern Greek, though, the planet is called Poseidon (Poseidonas), the Greek counterpart to Neptune.