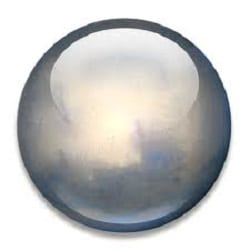 Ceres is the goddess of agriculture. The planet is associated with the reproductive issues of woman, as well as pregnancy and other major transitions in a woman’s life, including the nine months of gestation time, family bonds and relationships. For some astrologers Ceres is the ruling planet of Virgo, and the archetype of a Virgin goddess. Ceres reflects to independent women who are often unmarried.

In ancient Roman religion, Ceres was associated with grain crops, fertility and motherly relationships. She was originally the central deity in Rome’s so called plebeian or Aventine Triad, then was paired with her daughter Proserpina in what Romans described as “the Greek rites of Ceres”. Her seven-day April festival of Cerealia included the popular Ludi Ceriales (Ceres’ games). She was also honored in the May lustratio of the fields at the Ambarvalia festival, at harvest time, and during Roman marriages and funeral rites.

Ceres is the only one of Rome’s many agricultural deities to be listed among the Dii Consentes, Rome’s equivalent to the Twelve Olympians of Greek mythology. The Romans saw her as the counterpart of the Greek goddess Demeter, although Triptolemus was the god of farming whose mythology was reinterpreted for Ceres in Roman art and literature.

The complex and multi-layered origins of the Aventine Triad and Ceres herself allowed multiple interpretations of their relationships; Cicero asserts Ceres as mother to both Liber and Libera, consistent with her role as a mothering deity. Varro’s more complex theology groups her functionally with Tellus, Terra, Venus (and therefore Victoria) and with Libera as a female aspect of Liber. No native Roman myths of Ceres are known. According to interpretatio romana, which sought the equivalence of Roman to Greek deities, she was an equivalent to Demeter, one of the Twelve Olympians of Greek religion and mythology; this made Ceres one of Rome’s twelve Di Consentes, daughter of Saturn and Ops, sister of Jupiter, mother of Proserpina by Jupiter and sister of Juno, Vesta, Neptune and Dis. Ceres’ known mythology is indistinguishable from Demeter’s.

In ancient Greek religion and Greek mythology, Demeter is the goddess of the harvest, who presided over grains and the fertility of the earth. Her cult titles include Sito, “she of the Grain”, as the giver of food or grain and Thesmophoros: divine order, unwritten law; bringer, bearer, “Law-Bringer,” as a mark of the civilized existence of agricultural society.
Though Demeter is often described simply as the goddess of the harvest, she presided also over the sacred law, and the cycle of life and death. Goddess of the seasons; Demeter means “Earth Mother”.

In Hinduism, Shakti from Sanskrit shak, “to be able”, also spelled as Sakthi or Shakthi, meaning “power” or “empowerment”. She is the primordial cosmic energy and represents the dynamic forces that are thought to move through the entire universe. Shakti is the concept, or personification, of divine feminine creative power, sometimes referred to as ‘The Great Divine Mother’ in Hinduism.

The word cereals derives from Ceres, commemorating her association with edible grains. Statues of Ceres top the domes of the Missouri State Capitol and the Vermont State House serving as a reminder of the importance of agriculture in the states’ economies and histories. There is also a statue of her on top of the Chicago Board of Trade Building, which conducts trading in agricultural commodities.

Ceres appears as a character in William Shakespeare’s play The Tempest (1611).

An aria in praise of Ceres is sung in Act 4 of the opera The Trojans by Hector Berlioz.

The goddess Ceres is one of the three goddess offices held in The National Grange of the Order of Patrons of Husbandry. The other goddesses are Pomona, and Flora.

Ceres is depicted on the Seal of New Jersey as a symbol of prosperity.